Wuhan achieves milestone as malls reopen, but to cold shoulder 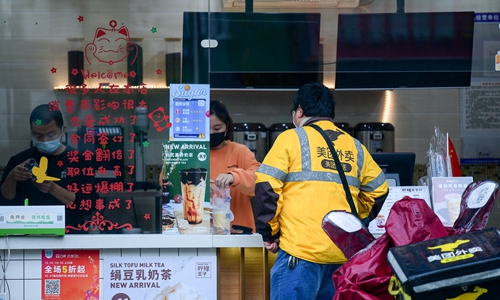 Commercial businesses in Wuhan, the hardest-hit city in China by COVID-19, partly reopened on Monday after more than two months of suspension, signaling a milestone in the country's hard fight against the epidemic.

The first day some shopping malls reopened, some employees and shop owners told the Global Times they witnessed more than halved visitor flows and income.

Zhongshang  Square shopping mall, a major shopping center in Wuchang district, received 20 percent of its previous daily visitor flow volume in working days before the outbreak, the Global Times learned from the mall.

"Some people are still cautious about going to public places. Besides, not everyone is allowed to go out due to the restrictions in residential communities," an employee with the Zhongshang mall told the Global Times on condition of anonymity.

According to Wuhan media, nearly 1.25 million customers visited the mall in July 2019, making the mall the third most popular in the city.

An anonymous employee at Wushang Zhongyuan Square shopping mall in Wuhan's Qingshan district told the Global Times on Monday the mall saw 30-40 percent of the average daily flow in working days before the outbreak. The mall's daily sales on Monday were estimated at less than half of the previous level.

"Except for the entertainment and catering operations, all other stores in the mall reopened today. Cosmetics stories are the most popular ones among customers," said the employee.

About 700,000 customers visited the Zhongyuan mall in July 2019, media reported.

Wuhan is a bustling commercial city and has  a vital cluster of colleges and manufacturing bases in Central China. According to industry reports, sales of 21 major malls and commercial circles in the city reached nearly 30 billion yuan ($4 billion) in 2018.

After being closed for more than two months amid the epidemic, many shopping malls reopened on Monday in Wuhan including the landmark Chuhehanjie Street, with 135 of the 167 stores on the street reopened, China Central Television (CCTV) reported.

The street had received more than 30 million visitors since it was put into operation in 2011, the street manager Xiao Jingbo told CCTV.

Sales of the street in 2018 were 1.65 billion yuan, according to industry reports.

Stores on the street take each customer's temperature before letting them in and disinfect clothes and shoes after each customer tries them on. Some restaurants and coffee shops such as Starbucks only provide take-away services, according to CCTV.

Some customers told CCTV that they do not worry as the stores and malls adopt strict prevention measures. But some netizens still warn Wuhan locals not to flock to the malls all at once.

Cao Dahang, a Wuhan resident, is one of the people who's quite cautious about going to shopping malls. He told the Global Times on Monday that Wuhan just started to reopen and most people still choose to stay at home out of safety concerns. It is still necessary to stay cautious, according to Cao.