Zhang Jixian, the first doctor to report COVID-19 cases to Wuhan authorities on December 27, said she had not expected the disease to be so infectious or serious, while noting that local authorities reacted promptly after receiving her report. 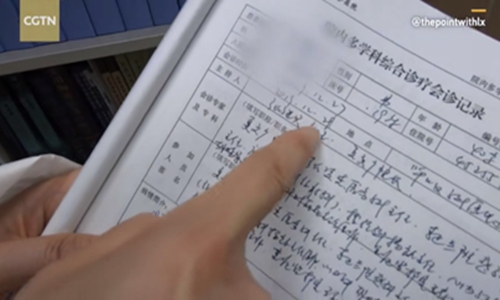 Zhang, director of the department of respiratory and critical care medicine at the Hubei Provincial Hospital of Integrated Chinese & Western Medicine, showed records of a medical consultation on December 29, 2019, of seven COVID-19 patients the hospital treated at the early stage of the outbreak in an interview with CGTN on Saturday.

According to the record, a vendor at the Huanan Seafood Market who was sent to the hospital on December 27, 2019 showed the severest symptoms among the seven. CT results showed infecting lesions and ground-glass opacity in his lungs.

All the seven patients were admitted around December 27 and showed features of cluster transmissions. Five of the seven were in critical condition with possible threat to life, read the consultation conclusion.

The hospital could not define the source of infection due to limited conditions, and suggested the district, the Wuhan and Hubei provincial CDC to organize more expert consultations on the cases, the conclusion said.

According to the timeline of China's reaction to the COVID-19 outbreak, on December 27, 2019, Zhang first reported three suspicious cases she had treated to the district disease control and prevention center.

"I reported to the district at noon, and they came to conduct an epidemiological survey that afternoon and collected patients' blood samples and throat swabs," Zhang told CGTN.

The result of the consultation on December 29 was also reported to the district, who sent experts to the hospital again that day collecting patients' blood and asking questions about patients' medical history.

"They reacted quite quickly," Zhang noted.

On January 3, just days after Zhang's report, China formally began to take the initiative to report the situation to the World Health Organization and other countries, including the US.

"I speculated that it may be a kind of infectious disease, but did not expect it to spread like this, so infectious and so serious, and affecting so many areas," she said.

As to questions over why experts and authorities did not notify the public that the disease could spread from person to person, Zhang said that a process is required to learn about a disease and experts could not say too much to the public before they understood the issue.

"If I am a scientist, how should I inform the public before I reach any conclusion? We should have a rigorous attitude," she said.