CHINA Wuhan carries out 1 million tests in a week

Wuhan carries out 1 million tests in a week 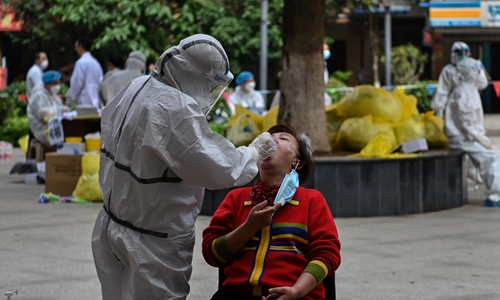 A medical worker takes a swab sample from a man being tested for the COVID-19 in Wuhan,Central China's Hubei Province, on Friday. (Photo: AFP)

Hubei province conducted 1.5 million nucleic acid tests between May 11 and 17, with 72 percent, or roughly 1.05 million, done in Wuhan, as the city carries out its plan for universal tests on all residents.

The asymptomatic positive rate was 46 out of 1 million tested, a significant drop from 660 out of 1 million in April. The dropping silent carrier rate suggests an improved epidemic control situation, and the group has low infectivity, a city official said at a press conference on COVID-19 control on Monday.

If asymptomatic patients have strong infectivity, they should have contracted the virus to many people. The low asymptomatic positive rate currently suggests silent carriers are not that infectious, analysts explained.

A media outlet earlier reported that an April antibody spot check on 11,000 people in Wuhan showed a 5 percent antibody positive rate, claiming that in line with this rate, 500,000 out of 11 million Wuhan residents should have been patients.

But the antibody positive rate mentioned by the media was not released by an official source.

How the 11,000 samples were chosen was also unknown.

Analysts reached by the Global Times on Tuesday explained  that if samples involved in the spot check were not obtained randomly in the city, it would be erroneous to deduce that the entire city of Wuhan has an antibody positive rate of 11,000 people, as this group does not represent the 11 million residents.

In communities with a higher number of infections, the antibody positive rate will be high, as these communities had more patients and asymptomatic carriers at the peak of the epidemic. Many people might have shown mild or no symptoms then, and they did not take a nucleic acid test, analysts further noted.

Yang Zhanqiu, deputy director of the pathogen biology department at Wuhan University, told the Global Times on Tuesday that people don't need to worry about the antibody positive rate, and the current nucleic acid tests, which detect existent silent carriers and prevent them from infecting others, is on the right track.

Yang noted that Wuhan's current "10-day" testing campaign was aimed at the elderly and the young, as well as residents who do not have stable jobs. These groups were not covered in previous rounds of tests in preparation for resumption of work and production.

The citywide testing is free and communities are responsible for its implementation, which can guarantee there will be no parts of the city unaccounted for.

After community level preparation work, citywide testing was confirmed by the government on Thursday.

Different districts have different testing speeds based on population and previous coverage. Based on current progress, all districts should complete testing by Monday, 10 days after the government confirmation, Yang said.