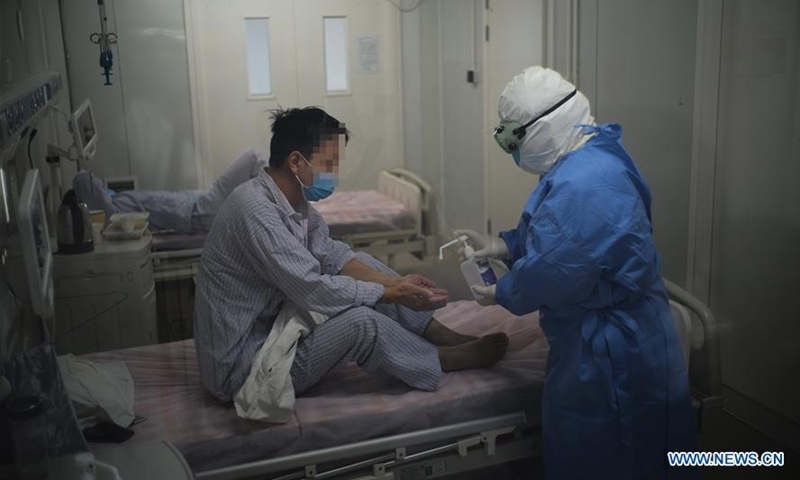 A nurse disinfects the hands of a COVID-19 patient at an isolation ward in Beijing Ditan Hospital in Beijing, capital of China, June 16, 2020.

An article online calling a renowned Wuhan doctor the new "whistle-blower" after he allegedly claimed that the coronavirus is equivalent to "SARS and HIV combined" has drawn widespread attention. However, the doctor confirmed to Global Times on Sunday that he never made such remarks, and his hospital also criticized the article for spreading rumors.

The article claimed that after multiple laboratory tests and analyses of deaths from the coronavirus, Peng Zhiyong, director of the Intensive Care Unit at Zhongnan Hospital of Wuhan University, reached the conclusion that the coronavirus is the "SARS and HIV viruses combined," and asymptomatic virus carriers are also contagious.

The article was posted on Chinese social network WeChat Moments a while ago and led to widespread concern among the public.

Meanwhile, Peng told the Global Times on Sunday that he never made the remarks as the article has claimed, or been interviewed by the writer, and that the article was only using his identity to spread falsehoods.

"Several other articles have been using my name to spread rumors across the internet since early March," he said.

On Saturday, the Zhongnan Hospital of Wuhan University issued a statement, slamming the article for spreading false rumors that have misled the public and impacted China's epidemic prevention efforts.