Wuhan emerges from lockdown amid caution over asymtomatic patient risks 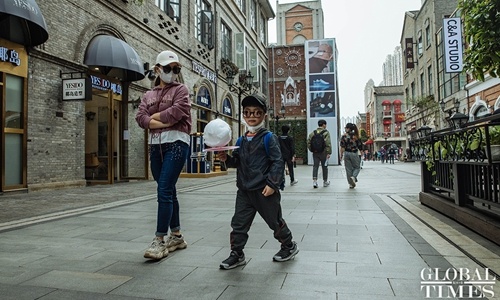 Those who had been staying in Wuhan since the city's lockdown to contain the COVID-19 pandemic keep asking themselves for more than two months: What do I want to do the most after the lockdown is lifted and life returns to normal?

That day finally came on Wednesday.

When traffic police began pushing aside the highway roadblocks that had cut off the city's link to the outside world for the past two months; when the first train from Wuhan took hundreds of stranded passengers to their homes; when hundreds of cars crowded the city's highways during the morning rush; when crowds jammed Wuhan's famous commercial spots, Wuhan woke up after two months of lockdown.

For many Wuhan lovebirds, getting married became their greatest motive to celebrate the city's phased victory in its hard-fought battle against the virus, as couples-to-be rushed to the marriage registration. An employee from the Wuhan district marriage registration office told the Global Times that newlyweds were spared the traditional ritual of taking oath to avoid contagion. "It does not matter, as today is a special day, a new start for me and for Wuhan," said Xu Lin, a Wuhan resident who got married on Wednesday.

Long lines also emerged in front of Wuhan train stations, where stranded people took the train home, and Wuhan locals eager to return to work outside the city.

"During the past 80 days, I promised myself I would never come back to Wuhan again," said Cao Lin, a Guizhou local who has been stranded in Wuhan since January. "But I cried when I saw the live broadcast of Wuhan's lockdown lift today, and I decided to come back when Wuhan returned to normal. My heart will always be there with this strong, brave and heroic city."

Media reported that around 55,000 people had booked train tickets out of Wuhan for the first day of the lifted lockdown.

Cao Guangjing, deputy Party secretary of Hubei Province, said at a Wednesday conference that the lockdown lift in Wuhan marks a decisive progress in the city's battle against the virus.

But the city's lockdown easing, unavoidably, ignited suspicion from foreign media, such as the New York Times and Wall Street Journal, as they questioned whether it is too early to lift the ban, as some feared a second outbreak may engulf the city, or even other parts of China, after it re-opens. And they repeated the old line that Wuhan under-reported its real infection numbers.

Wuhan's health commission reported that Sunday only had 297 patients, a sharp drop from more than 15,000 at its peak in January.

Wuhan reported only one new COVID-19 patient on Tuesday.

An employee from the disease control center in Wuhan's Donghu hi-tech district told the Global Times that they are now focusing on screening asymptomatic patients. "We asked factories and companies in our district to conduct health checks for returnees. Once confirmed, the investigators will ask about the patient's travel history, give each one a report, and analyze their possible contagion origin."

The employee said that until now, the district has only recorded a very small number of asymptomatic patients.

Many Wuhan residents said it is about time for government to lift the ban.

"Wuhan is one of the safest places in China, as the pain still lingers in Wuhan people's hearts, which propelled the people and government to remain on high alert to avoid contagion. And the hospitals have formed a relatively mature test and treatment mechanism for patients, not mention the number of COVID-19 patients dropping drastically in the city," said a doctor from Renmin Hospital of Wuhan University.

Doctors and nurses in Wuhan's No.7 hospital were on alert on Wednesday when increased number of workers came to receive CT and nucleic tests before they were summoned back to work in recent days. Long lines for CT scans and nucleic tests were spotted in front of the hospital.

A nurse in the hospital told the Global Times that people who came to test was three times more on Wednesday than the previous day, and many voluntarily came.

One of the testers who lives in Wuhan surnamed Xiao told the Global Times that she chose to do those tests out of responsibility for herself and others. "I am about to go to work tomorrow. It better knows if I am the virus carrier before I go. I don't want to cause cluster contagion in my workplace, nor do I want to ruin Wuhan's hard-fought victory."

As more and more Wuhan people travel outside the city, other Chinese cities also ramped up tests for returnees from Wuhan to prevent further contagion. For example, Beijing requires anyone from Wuhan to the capital to undergo nucleic tests twice—once before they leave Wuhan and another after they arrive in Beijing. Anyone with a positive or no nucleic test is forbidden from getting on the train.

Taxi driver Liu Qi started to work for the first time after the city was ordered sealed off in January. "I received 30 rides today, half of my normal rides per day before the pandemic."

Liu said many Wuhan people remain on high alert, so they prefer to stay in. "Some of my colleagues refused to start work today. They preferred to wait another 14 days after the easing of the lockdown," said Liu, noting that asymptomatic patients are a real pain.

The COVID-19 prevention task is still arduous in Hubei as it faces increasing pressure from imported cases, and the number of asymptomatic carriers has risen since April 4, Cao Guangjing said.

"Easing of the lockdown means that Wuhan has been catching up with the pace of other Chinese cities' virus battle. But it does not mean we can catch a breath now," said Zeng Guang, an expert at China's National Health Commission.

He suggested that asymptomatic patients have become the new concern in our virus battle, but it should not be a source of excessive concern as the scale of patients, severity and contagion ability of the virus are not serious, and are controllable.

Blue and yellow barriers can be seen around most residential compounds. They were erected in an attempt to wall off virus transmission.

Residents in those communities rely heavily on deliveries and stores nearby. A woman wearing pajamas was seen directing a delivery guy from her window. After getting him where she wanted, she lowered a clothes hook and snagged her order without ever leaving her window sill.

"We've been raising our guard against contagion for the past two months. It won't hurt to remain vigilant for another two months. Pollyannas will make the city's hard-won battle go up in smoke," Liu said.