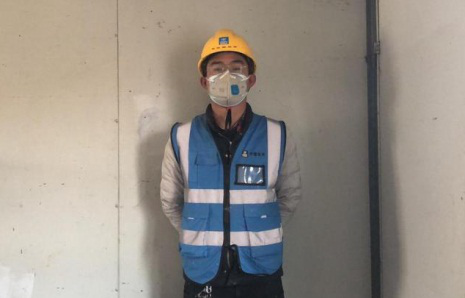 30-year-old Gong Dafei, who works on the construction of Huoshenshan Hospital in Wuhan, Central China's Hubei province, has decided to donate all his salary to the facility. (Photo: chinadaily.com.cn)

A 30-year-old worker who labored under intense time pressure to complete construction of Huoshenshan Hospital in Wuhan, Central China's Hubei province, decided to donate all his salary to the hospital, according to local media.

When Gong Dafei heard the news about the construction of the hospital, he immediately decided to join in.

In spite of his family members' disapproval, due to concern about his safety, Gong left his home in Datong, North China's Shanxi province, and arrived at Wuhan on Jan 30.

"Since its outbreak and spread, I have kept paying attention to the conditions of the epidemic," he said. "We all know the hospital is of great importance to Wuhan and even the whole country, so I decide to donate my salary to the construction of the hospital."

"I just want to contribute my little amount and hope to welcome victory soon," he added.