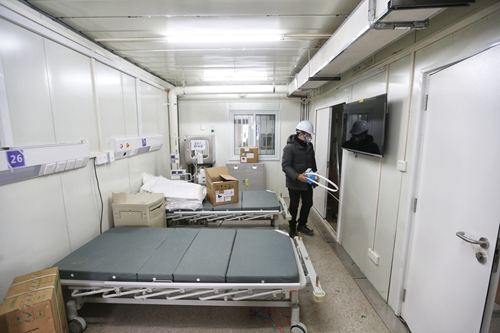 A worker installs medical facility in a room of the Huoshenshan Hospital. (Photo: GT)

China Telecom completed the information-based system for the hospital within 12 hours, including a hospital information system, long-distance treatment devices, 4G and 5G signals.

To speed up construction, China Telecom has installed an optical cable in Zhiyin Lake behind the hospital, allowing it to operate remote medical treatment via video with the People's Liberation Army General Hospital in Beijing.

A unit of 1,400 army medical staff will be responsible for medical treatment starting on Monday. The hospital will mainly treat confirmed patients.

Workers, trucks and excavators were racing against the clock to meet the Sunday noon deadline at construction sites.

Some confirmed patients with the coronavirus will be transported to the hospital at night, according to the Global Times reporter in Wuhan on Sunday.

The hospital is composed of independent second-floor buildings. Each floor has 100 wards. Every two inpatient wards have a room designated for medical staff.

To ensure medical staff do not get infected when taking care of patients, each ward has a  window, installed with a glass door, used to deliver medical devices and materials, according to  China Central Television.

Another hospital in Wuhan, Leishenshan Hospital, is expected to be completed on Wednesday.

More such hospitals are popping up across the nation as the central government mobilizes more medical resources to contain the virus outbreak.

The government in Huanggang, a city neighboring Wuhan with the second-largest recorded number of novel coronavirus infections, has also built a Xiaotangshan-like hospital.

Meanwhile, dozens of bulldozers and cranes are working on a 3,000-square-meter plot of land for a hospital to isolate and treat patients infected with the coronavirus in a suburb of Fuzhou, South China's Fujian Province.