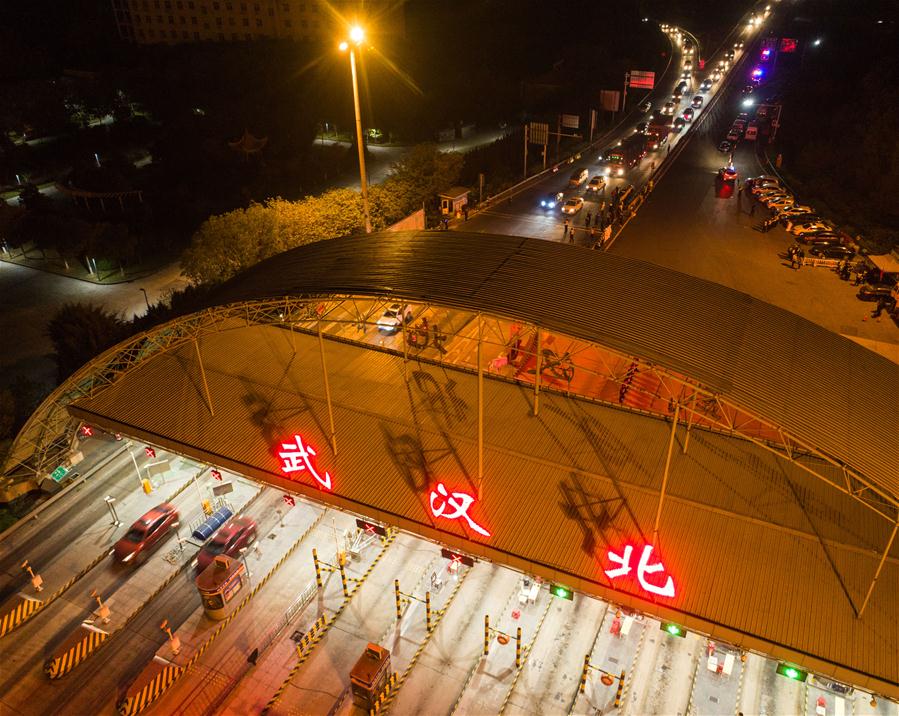 WUHAN, April 7 (Xinhua) -- As cars queued up at expressway toll gates and passengers prepared to board trains to leave Wuhan, the megacity in central China started lifting outbound travel restrictions from Wednesday after almost 11 weeks of lockdown to stem the spread of COVID-19.

At Fuhe toll gate in nothern Wuhan, cars honked horns and rushed out after barricades were removed at midnight.

Guo Lei, who ran a business in Wuhan, drove his car with six other people aboard to the toll gate at around 8:40 p.m. and waited for a homebound trip.

"I can't wait returning to my hometown," said Guo, a native of east China's Shandong Province. "I have lived in Wuhan for eight years. During the Spring Festival holiday, my relatives came to the city and helped me deliver goods. We were all stranded here due to the epidemic."

Big data from Wuhan traffic police forecasted the expressways would see the peak of outbound vehicles on Wednesday.

As more enterprises resume their operations, Wuhan has seen an increase of nearly 400,000 vehicles in transit in the past half month, and the number is expected to reach 1.8 million after Wednesday, according to the city's traffic police.

"I'm very happy to see the lockdown was lifted. The reopening of outbound traffic represents the epidemic situation has improved, and our hard work over the past two months has paid off," said Fang Jing, a staff member of an expressway toll station in Wuhan.

"We still need to protect ourselves from the virus and remind passengers to pay attention to personal health since the epidemic is not yet over," Fang added.

Wuhan Tianhe International Airport started resuming domestic passenger flights early Wednesday. The airport is expected to see more than 200 inbound and outbound flights on the day, according to the airport.

On Jan. 23, Wuhan declared unprecedented traffic restrictions, including suspending the city's public transport and all outbound flights and trains, in an attempt to contain the epidemic.