Wuhan offers a glimpse of hope for Milan, New York

After 76 days in strict lockdown, Wuhan in Central China's Hubei Province, which was the first to bear the brunt of what has become a global pandemic, reopened to the outside world on Wednesday morning. 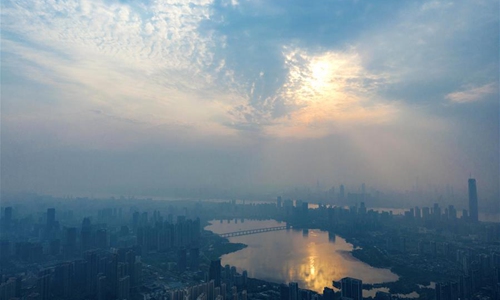 While much work remains to be done to restart the economy and prevent a resurgence of the deadly coronavirus, Wuhan's reopening offers a desperately-needed commodity for the hundreds of millions of people across the world who are still going through surreal times as those in Wuhan have - hope.

Particularly, for major cities like Milan in Italy and New York City in the US, which are still in the middle of their battles against the virus, Wuhan showed that this invisible enemy, while extremely dangerous and tough, can be beaten and that there is indeed a bright light at the end of the tunnel.

With the number of new confirmed cases dropping to zero, officials in the city of roughly 11 million residents lifted the lockdown order put in place on January 23, just a day before the most important holiday in China - the Chinese New Year. While this is far from declaring a victory given the persistent risks and challenges ahead, the move on Wednesday marks the biggest step yet for not just Wuhan but the entire world since the outbreak.

It is a moment when Wuhan residents can finally shout out to the world: "We are back!" It is a moment that shows the world that we can beat this common enemy, though we have to pay a huge price.

For Wuhan, this means its residents are now allowed to leave the city and others are welcome to visit. It means one of the largest transportation hubs in the nation is open for business again. It means millions of businesses in the city - small and large, service providers and manufacturers - can further pick up the pace to resume their operations. It means Wuhan is finally on the fast track to a full recovery.

In many ways, Wuhan is similar to Milan and New York City. In terms of population, Wuhan is not that far off Milan's 10 million and New York's roughly 8.6 million. All three cities are crucial to their respective countries' economies - Wuhan is a major transportation and manufacturing hub for China, Milan accounts for almost half of Italy's economic output and New York City is the financial capital for not just the US but the entire world.

What they also have in common, unfortunately, is that they have become the epicenters of the coronavirus outbreak in their respective countries. They face the same enemy, the same danger and the same challenges. Therefore, if they adopt similar measures, despite their different cultures and management systems, there is no reason to believe that Wuhan can beat back the virus, but Milan and New York City cannot.

Promisingly, both Milan and New York City have imposed strict lockdown orders like Wuhan, although some argue that they made the decision a little too late and enforcement might have been less strict. Those measures have already shown some encouraging signs, as the increases in new infections in both places have slowed somewhat in recent days.

However, as officials there have been quick to point out, the fight is far from over. In New York, mayor Bill de Blasio said on Tuesday that while there has been "progress," the city has not yet reached a "turning point." Even in Wuhan, officials remain highly cautious, stressing that "zero new cases does not mean zero risks and that lifting the lockdown does not mean scrapping anti-virus efforts."

Beyond the measures against the virus itself, Wuhan is now facing another unprecedented challenge of restarting its economy, while residents remain understandably wary and risks remain high.

However, we must understand that this is something we have never seen before and it is simply impossible to wait for everything to be perfect to restart the economy. But as Wuhan has shown us, we have to be resolute and we have to be cautious, and meanwhile, we should also be hopeful.

Going forward, global cooperation is more paramount than ever, because while the fight against the virus requires lockdowns, the fight to revive the economy will require free flow of travel and trade.

China has and will continue to seek cooperation with other countries. We hope all countries can put aside their political differences and work jointly toward the same goal - defeating this common enemy and restarting the global economy.