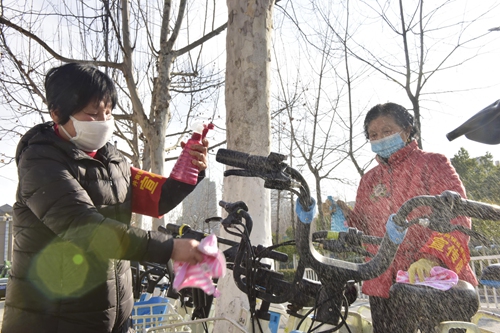 Several community officials in Wuhan, the epicenter of the novel coronavirus pneumonia outbreak (COVID-19), have been punished for failing to report a patient suspected to be infected with the virus in time, which resulted in the patient's death.

A report published by the city's disciplinary authority on Sunday revealed four cases in which local officials were found to have failed to perform their duties in the prevention and control of the epidemic.

One of the cases shows that officials from Zhengkang community in the city's Qiaokou district failed to report information on a resident, surnamed Cheng, which meant he could not receive timely and effective treatment. Cheng eventually hanged himself to death.

The community's Party branch chief and deputy director received a warning from the Party for knowing about Cheng's illness but failing to take necessary measures in time. Other grass-roots officials were criticized for lack of coordination and thoroughness in their work.

In other cases, local officials were found to have failed to implement the policy of isolating people who had been in close contact with newly infected people, resulting in a large number of close contacts.

The discipline inspection and supervision authority stressed that all officials and Party members should resolutely avoid formalism and bureaucratism, and vowed to seriously investigate and deal with those who failed to take responsibility, inaction, and misconduct.

Faced with the sudden COVID-19 outbreak, problems such as sloppiness and poor work management have been exposed among Wuhan and Hubei authorities, reflecting serious shortcomings in local governance.

The announcement came after central government officials summoned officials from Wuhan following an incident, in which local officials failed to fulfill their duties when transferring a group of coronavirus patients to a designated hospital.

It also came on the heels of a reshuffle of top officials in Hubei in which new Party chiefs to both the province and the capital city Wuhan were appointed. Both have years of experience in legal affairs and are considered "firefighters" who are decisive in dealing with public health crises.