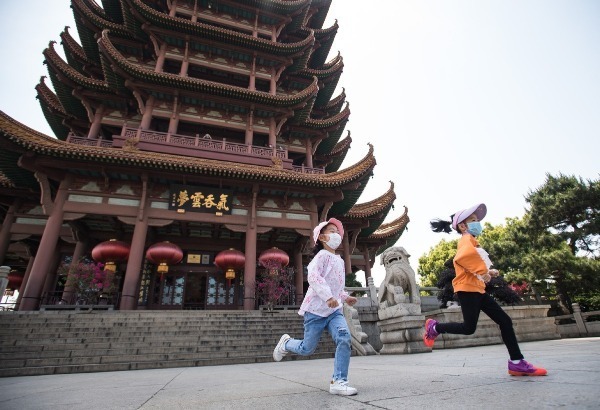 WUHAN -- A tour group from outside Hubei province on Tuesday kicked off a sightseeing tour of the provincial capital of Wuhan, the first of its kind since the city's lockdown was lifted on April 8.

The eight-member group consists of a family of seven people and a friend, all from neighboring Hunan province.

Their arrival marked a significant step in the resumption of trans-provincial group tours for the province where the COVID-19 epidemic wreaked havoc. On Saturday, a group of six travelers flew to Northwest China's Lanzhou city, becoming the first tour group to travel out of the province.

Hubei last week announced that trans-provincial group tours were allowed to resume, and indoor tourist sites will be reopened in the province.

Tourist spots were allowed to fill up to 50 percent of their reception capacity, up from the previous 30 percent.

According to a notice issued by the provincial culture and tourism department, strict anti-epidemic measures remain a top priority.

"Wuhan people have undergone universal nucleic acid tests, and the city has rich medical resources and publishes information in a transparent way. I feel safe traveling here," said Yu Boyue, a member of the tour group.

On Tuesday, the group visited Yellow Crane Tower, a landmark scenic spot in Wuhan. Together with the group were representatives of over 40 non-local travel agencies, who were conducting in-person investigations for future cooperation with local tourist sites.

Statistics show that Wuhan received more than 310 million tourists in 2019, making it one of the most popular tourist cities in China.