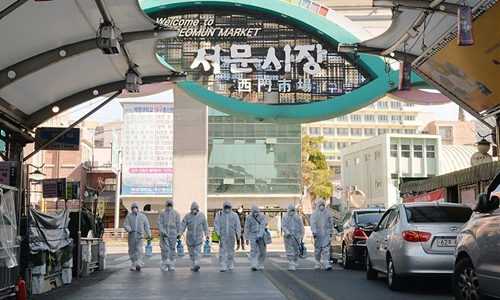 Chinese city Wuhan, hit hard by the COVID-19, will donate 60,000 face masks to South Korea, which is "of great importance and will support the receiver areas," South Korea's Consul General in Wuhan told the Global Times on Tuesday.

Yonhap reported that the Wuhan government has expressed its willingness to help South Korea, as the city's situation is improving. The move is to thank South Korea for its help during the critical stage of the outbreak.

Media reported the 60,000 masks will be sent to Wuhan's sister cities Daegu, Gwangju, Daejeon and Cheongju. The masks are at Shanghai airport for customs clearance.

Consul General Kang Seung-soek confirmed the donation, but did not give more details about the amount and receiving areas.

In February when diplomats of multiple countries left Wuhan due to the COVID-19 epidemic, Kang assumed office and arrived in Wuhan on a cargo aircraft, which carried epidemic control supplies. He was praised by the Chinese Ministry of Foreign Affairs and the public as "a hero going against the tide."

In a previous interview with the Global Times, Kang said he was not a hero but serving friendly ties between the two countries.

Shanghai and East China's Auhui Province have also donated supplies, including masks, to South Korea, when outbreak started in the country. But this is the first time that hard-hit Wuhan will make a donation.