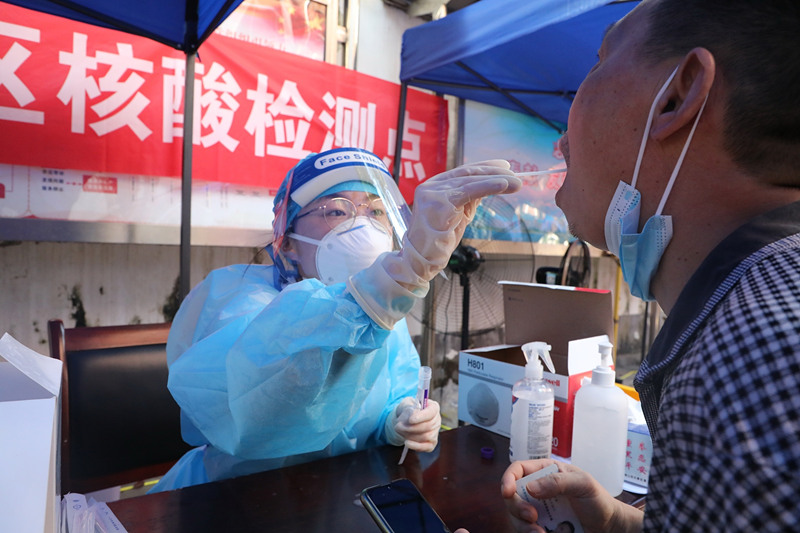 The city launched a new, all-inclusive testing drive on Tuesday. By the end of Thursday, more than 5.51 million of the samples had been tested, according to a press conference held by the Hubei provincial epidemic prevention and control headquarters Friday morning. This round of mass testing will finish on Saturday.

Hard hit by COVID-19 in early 2020, Wuhan, the capital of Hubei Province with a population of more than 12 million, was the world's first megacity to complete a comprehensive nucleic acid-testing campaign last year.

On the campus of Wujiashan No. 4 High School in Wuhan, where a make-shift testing site was set up, 3-year-old Li Junze buried his head in his grandma's arms after receiving a swab test.

"We took the test to protect each other, just like your idol Ultraman fought with monsters to protect human beings," Deng Dahuan, the grandma, whispered in his ear.

"We were told that residents aged over one could take the test, so my whole family came here together," said Deng. "Getting tested is not only responsible for us but the whole society."

At 9 p.m. on Tuesday, Wuhan was still shrouded in steamy hot air at 35 degrees Celsius. Chen Yangyang, a medical worker, was soaked in sweat while conducting swab tests at the Longyanghu Community site in Hanyang District.

"Wuhan has gained a wealth of experience during last year's outbreak. I believe those infected will be found quickly this time," said Chen.

She added that when Wuhan launched its new testing campaign on Tuesday, many people wished to get tested as soon as possible.

Over 28,000 medical workers and other staff members have been mobilized to work at 3,576 sampling sites across the city. Meanwhile, many people volunteered to maintain order at the sites and offer various assistance.

Luo Wenbo, a 31-year-old worker with Dongfeng Motor Group, gave up his vacation to volunteer at the site in Longyanghu Community. He was mainly in charge of helping the elderly scan QR codes for appointments and input personal information on their cellphones.

"As a resident of Wuhan, I want to do my part when my city is facing difficulties," said Luo.

"Wuhan attaches great significance to the emergence of the Delta variant, and the public cooperated actively. We believe the city will soon get over it," said Hu Ke, a professor at the respiratory department of the People's Hospital of Wuhan University.

Lei Dengfeng, a manager at the Wuhan branch of KingMed Diagnostics Group Co., Ltd, has worked in sample logistics for more than ten years.

"We have to send the samples within four hours after the swab tests are carried out," said Lei, holding a sealed box and a registration form at a community site in Hanyang District on Thursday.

Lei said technicians of KingMed Diagnostics developed a new system overnight before Tuesday to greatly shorten the time of information collection of a megacity like Wuhan.

The system allows residents to scan a QR code and input personal information such as their name, phone number, address, and ID number while queuing for the test.

Ren Chanjun, manager of the department of laboratory diagnostic at the KingMed Diagnostics Wuhan branch, has a clear memory of Wuhan's first citywide nucleic acid tests last year. It tested over 9.89 million people between May 14 and June 1.

"From 19 days to only three days, 'Wuhan speed' tells the story," said Ren.

Zhou Jinli lives at Zhuankou Street, the only current medium-risk area in Wuhan. She and her husband didn't rush to buy anything when they heard that their residential compound would implement closed-off management.

"It is because we knew the community workers and supermarkets nearby would guarantee our daily necessities, as they did last year," said the 30-year-old staff member with the Wuhan Sports Center.

According to Fan Li, deputy director of the sub-district office of Zhuankou Street, all 14 communities on the street have organized volunteer groups, each consisting of 10 to 50 people, to meet residents' essential needs.

"We ascertain people's needs via group chats every day, while for the old, the disabled, and those with illnesses, we knock on their doors," Fan said.

Those goods are delivered to the community by supermarkets nearby and then distributed to residents by community workers and volunteers, she added.

According to the provincial epidemic prevention and control headquarters, 58 e-commerce platforms, 13 major supermarket chains, and over 400 gas stations in the city are open for business as usual and promised to stabilize food prices and ensure adequate supply.

In the past three days, Zhou has taken two nucleic acid tests, and perhaps more await her during the quarantine. "But I'm okay with all these arrangements, as long as what I do can help my city recover soon," she said.