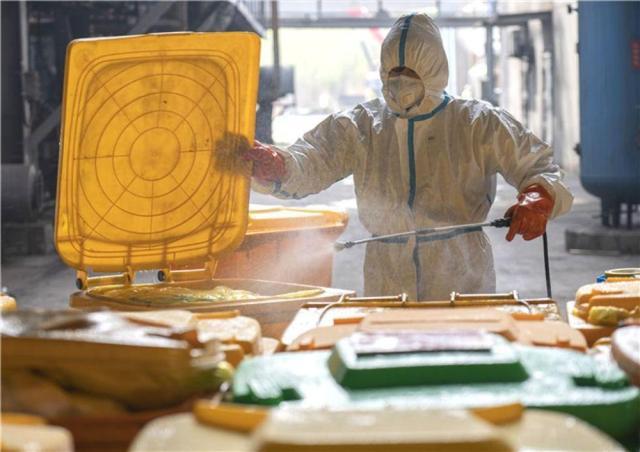 By March 28, Wuhan’s daily medical waste disposal capabilities have improved to 265.6 tons from 50 tons before the COVID-19 outbreak, while that of the province to the current 667.4 tons from the previous 180 tons.

The medical waste and medical sewage in the whole province are handled in an orderly manner, with no environmental problems caused by the prevention and control of the epidemic, said Lyu Wenyan, head of Hubei provincial department of ecology and environment, at a recent press conference.

Together with nine other central departments, the Ministry of Ecology and Environment released a plan on disposal of medical waste on Feb. 24. The ministry has deployed 46 mobile medical waste treatment facilitates and 65 transport vehicles to the province, including Wuhan. The ministry also sent 140 professional medical waste handlers to the city.

Under the overall coordination of the central government, within 14 days a new medical waste disposal center, with a capacity of 30 tons, was build in the city.

Local governments have also launched a raft of measures to enhance its handling capability. Wuhan built 17 temporary warehouses for storage of medical waste across the city, covering an area of 15,000 square meters, according to Yan Zhongning, head of the city’s bureau of ecology and environment.

The urban cleaning department has arranged vehicles and waste incineration power plants to transfer and dispose of some medical waste.

The bureau of ecology and environment strengthened environmental monitoring to ensure safe disposal of medical waste, including assigning a team to monitor over the 150 hospitals designated for treating COVID-19 patients, Fangcang makeshift hospitals, isolation facilities, medical waste treatment facilities, and sewage treatment plants in the city on a daily basis.

To assist Wuhan in handling medical waste, Hubei also sent teams from cities including Xiangyang, Huangshi and Xianning to the city.

Such achievements are inseparable from the correct guidance of the central government.