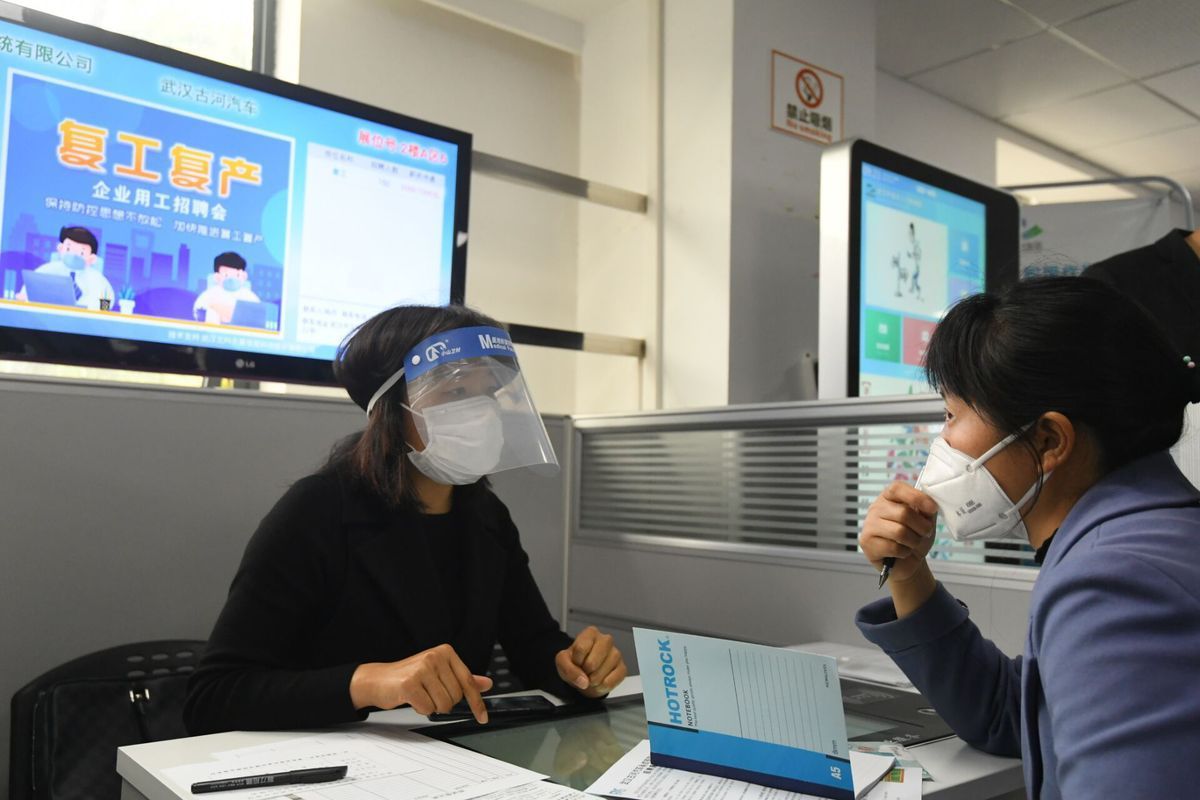 A job seeker consults a staff worker at a job fair in Wuhan, Hubei province, on April 21, 2020. (Photo: chinadaily.com.cn)

The Wuhan government has rolled out a slew of policies to help more university graduates to find jobs or start businesses in the city as they face more challenges in employment due to the COVID-19 outbreak, a notice issued by the government said on Tuesday.

State-owned enterprises in the city should allocate at least 60 percent of their employment quota this year to recruit new college graduates, and micro, small and medium-sized enterprises can get 1,000 yuan ($141) in subsidies for each graduate they employ, the notice said.

The government is also encouraging Fortune 500 enterprises as well as other major public, private and high-tech companies in China to hire at least 250,000 graduates this year, it said.

Good startup projects by graduates can receive between 30,000 and 300,000 yuan in funding, and the government will provide mentors to offer graduates guidance, it said.

Entrepreneur incubation centers can receive 150,000 yuan in bonuses every year for five years if new graduates account for more than 60 percent of all entrepreneurs there, it said.

Graduates in the past five years can get one-time subsidies of 8,000 yuan if they are self-employed or have started micro and small enterprises in Wuhan, it said.

Graduates are also being encouraged to start their businesses in rural areas. They can get up to 2,000 yuan in subsidies as well as interest-free loans and accommodations for their business. In addition, they can receive up to 200,000 yuan in subsidies if their entrepreneur projects are selected as model projects by the Hubei provincial government.

Further, graduates that start their businesses in new retail, noncontact delivery, online education and modern logistics will get one-time subsidies of 8,000 yuan, it added.

Fu Guangkai, 23, a senior student at Central China Normal University, said he plans to find a job in Wuhan after graduating as he feels attached to the city after living there for four years and sees great potential in its development.

Wuhan is not as stressful as first-tier cities like Beijing and Shanghai, yet it has more opportunities as a major city in Central China, he said.

Although many enterprises have reduced the number of new recruits due to the COVID-19 outbreak, Fu said he has obtained many requests for job interviews and that he is confident he can find a good job before graduation.

Zhu Shihu, 21, a senior student at Wuhan University of Technology, said he will start work in September at China Construction Third Engineering Bureau Co, which built Leishenshan and Huoshenshan hospitals.

"Seeing so many people at the company rushing to construct the two hospitals, which were key to treating more COVID-19 patients, has reaffirmed my decision to work at the company," he said.

"Our love for the city grows stronger as we are unable to return due to the epidemic," added Zhu, who is currently back in his hometown of Lhasa, in the Tibet autonomous region. "Many of my classmates have said they really want to return to the city before graduation."

Wuhan has also launched a series of other policies, including priority in getting permanent residence and offering low-price rental housing, to attract fresh graduates, he said.