CHINA Wuhan tourism rebounds one year after lift of lockdown

Wuhan tourism rebounds one year after lift of lockdown 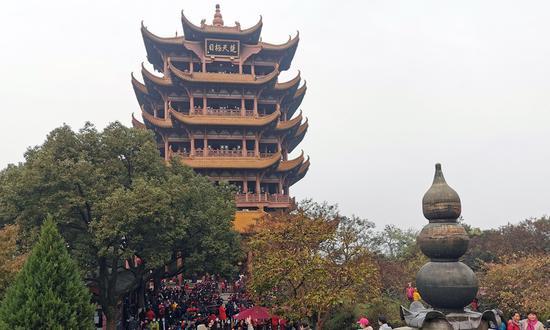 Almost a year after its lockdown was lifted, Wuhan, the coronavirus hard-hit city in Central China's Hubei Province, has witnessed a travel blowout. The just-passed three-day Qingming Festival holiday saw the city rank among the top 10 domestic tourist destinations, a scene few would have imagined a year ago.

Tourists from Hubei Province and across the nation went to the city's tourist attractions to spend their Qingming Festival holiday, which ended on Monday.

According to several Chinese online travel platforms, Wuhan was a top 10 tourist destination during the festival. Wuhan was also among the top 10 cities whose residents were most enthusiastic to travel, the Global Times learned from travel platform lvmama on Tuesday.

Yellow Crane Tower and Wuhan Ocean Park were among the top 10 scenic spots in Central China during the festival, according to Lvmama.

Ice cream in the shape of the Yellow Crane Tower trended on Chinese social media immediately after it appeared on the market during the Qingming Festival, as many tourists posted photos and videos of themselves with the ice cream.

"I made a list of all the recommended local dishes on my phone and tried all of them in Wuhan. We stood in long queues at almost every restaurant and snack shop. It took us about half an hour of waiting every time," Wang Yuxin, a Shanghai resident who traveled in Wuhan during the Qingming Festival holiday, told the Global Times on Tuesday.

Zhou Chaofeng, a local taxi driver, told the Global Times on Tuesday that during the holiday, he had at least three times as many passengers as on ordinary days.

"Most passengers were tourists from outside Hubei. Some headed for East Lake to enjoy blossoms, some went to tourist attractions such as Yellow Crane Tower, and some rushed to have local special snacks such as hot dry noodles," Zhou said.

He noted that his income per day during the holiday was almost the same as the holidays before the epidemic.

"Our daily life and work basically recovered since about last October," Zhou said.

Just after the city was lifted from lockdown, he hardly had any passengers as there were few people on the streets. During the past year, the streets have gotten busier and busier, he said.

On Tuesday, one day after the Qingming Festival holiday, the Global Times found that there were still many tourists visiting the city. On Jianghan Street, a 2-kilometer long pedestrian mall with shopping complexes, young couples, children and seniors were seen walking.

A 69-year-old tourist Zhang Rong from Northeast China's Liaoning Province told the Global Times excitedly that it's her dream trip.

"My friends and I decided to visit Wuhan in 2019, before the epidemic, but our trip was delayed for two years. Today, we made it," she said, adding that Tuesday was her first day in Wuhan and she will visit other scenic spots in Hubei in the coming days.

A traffic warden surnamed Tong at the walking street told the Global Times that around 300,000 to 400,000 tourists visited the scenic street during the Qingming Festival, and that there were so many visitors that "people could hardly move."

He said that he had witnessed the number of visitors pick up starting last April. "It was only a few thousand people in April 2020, and they were all Wuhan residents, but this year, I saw hundreds of thousands of people shopping in the street with different accents," Tong said.

"It meant that Chinese people across the nation know Wuhan is safe now, and the city is gradually returning to pre-epidemic activity after a year," he said.

As the first festival after the Spring Festival, during which time people were advised not to travel, the Qingming Festival witnessed a travel blowout.

Tourism insiders said that the upcoming May Day holiday is expected to be the "hottest travel golden week in history," and this is also true for Wuhan.