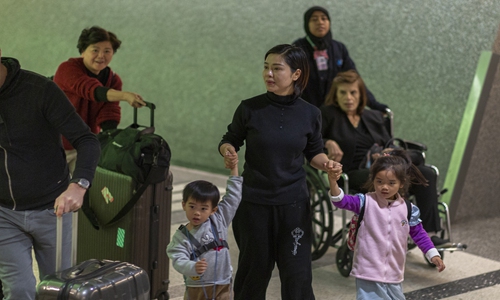 The National Health Commission (NHC) said Sunday that the pneumonia in Wuhan, capital of Central China's Hubei Province, caused by a new type of coronavirus was still "preventable and controllable," as public voices called for more open and transparent information amid anxiety of expanding transmission during the Spring Festival travel rush. (Photo: Global Times)

The National Health Commission (NHC) said Sunday that the pneumonia in Wuhan, capital of Central China's Hubei Province, caused by a new type of coronavirus was still "preventable and controllable," as public voices called for more open and transparent information amid anxiety of expanding transmission during the Spring Festival travel rush.

Chinese observers noted although the source and transmission route of the epidemic was not yet fully understood, the government has proposed many preventative measures and China's notification mechanism for epidemic prevention and control has greatly improved especially since the 2003 SARS outbreak.

A total of 3 billion trips are forecast to be made during the 40-day Chinese Spring Festival rush.

How to control and prevent the spread of the coronavirus in Wuhan, a dense transportation hub and international metropolis with nearly 10 million people, constitutes a test for the city's authorities who earlier on Sunday said they could not rule out the possibility of limited human-to-human transmission.

Two people have died from the virus.

Concealing the epidemic, like with the earlier period of severe acute respiratory syndrome (SARS) in 2002, risked causing a crisis in public confidence.

Speculation on the outbreak has begun building on Chinese social media ahead of the festival travel rush.

If a government tried to cover up the new cases to "not spoil the atmosphere of the Spring Festival," it would ultimately cause a disastrous blow to its credibility and also trigger a doubling of social panic, they warned.

Wuhan has monitored the close contacts of those infected and temperature detection is being conducted in airports and train stations, Wuhan authorities said on Sunday.

Working groups have been sent to all provinces of China to guide prevention and control of pneumonia caused by the new coronavirus, the NHC announced on Sunday night.

Vietnam and Singapore have discovered suspected cases too, arousing concerns that Wuhan could have more cases than reported.

The Wuhan virus also coincides with peak season for regular flu and pneumonia, prompting misunderstandings both at home and overseas.

The Sixth Affiliated Hospital of Sun Yat-sen University in Guangzhou, capital of South China's Guangdong Province on Sunday denied rumors that its medical workers may have contracted the new coronavirus.

At least two suspected cases have been reported in Shenzhen, Guangdong, and a third in Shanghai, the Hong Kong-based South China Morning Post reported on Saturday.

The cities' centers for disease control and prevention and the health authorities did not confirm the cases with the Global Times as of press time.

Although even having not confirmed the cases, Shanghai authorities said on Sunday that they have sent special working groups and expert teams to formulate emergency measures and make timely plans.

They said all medical institutions in the metropolis have comprehensively strengthened allocation of pre-examination triage and fever clinics.

The city has increased standardized monitoring, screening, diagnosis, treatment and disposal of suspicious cases to safeguard the health and safety of the public.

The National Health Commission said it had strengthened international cooperation and exchanges with WHO, China's Hong Kong, Macao and Taiwan regions and other related countries.

The coronavirus gene sequence was immediately shared with WHO and the response to the outbreak was "fully recognized" by the organization, the commission said on Sunday.

The pneumonia in Wuhan echoes the SARS epidemic that shook China and the world in 2002-2003.

The SARS virus and the new coronavirus do not share much in terms of medical pathology, but they both damage the lungs, Zhou Zijun, a professor at Peking University's school of public health, told the Global Times on Sunday.

But Zhou said the coronavirus in Wuhan appears to be far less serious than the virus that caused the SARS or the Middle East respiratory syndrome, known as MERS.

Moreover, the coronavirus was not spreading as rapidly, and the death rate was not as high, he noted.

SARS cases in the early days were concealed and the information was delayed, Zhou said, noting that such delays were unlikely to be repeated this time.

It was not simply a matter of discrediting rumors, but a more important task was to strengthen public awareness of prevention, dispel doubts and give the public confidence, said an observer from Beijing, who requested anonymity.