KUNMING, May 26 (Xinhua) -- Around 1,500 rifle bullets used by Japanese forces during WWII were found in southwest China's Yunnan Province, according to local authorities. 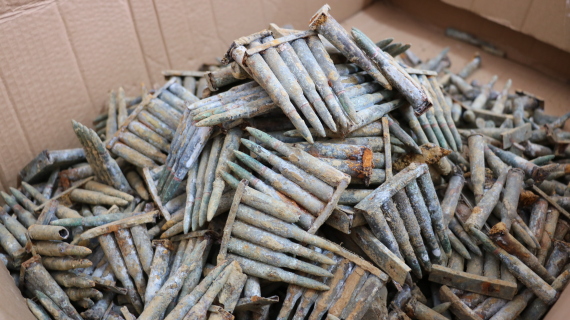 The bullets were dug up by Yang Huixian, a resident of Longling County under Baoshan City when he was working on his vegetable plot. "After digging down more than 30 centimeters, I found the bullets," Yang said.

He subsequently handed over the ammunition to the local cultural relics management institute.

The 6.5-mm-caliber bullets were from the Type 38 Rifle of the Japanese forces during WWII, and the place where they were found used to be a battlefield, according to the Longling County Cultural Relics Management Institute.

Longling, located on the border of western Yunnan, was one of the main battlefields of the Anti-Japanese War in WWII.

Some ammunition from WWII had been found sporadically in Longling, and the number of ammunition was large this time, said Qiu Jiawei, director of the institute.

"After testing, we found that the ammunition is basically intact, but invalid," Qiu said. "We intend to put them on display in the Anti-Japanese War memorial hall to remind the general public to cherish peace."

"The discovery of the ammunition provides important evidence for the study of the deployment of Japanese troops and their weapons during the battle in Longling," Qiu added.