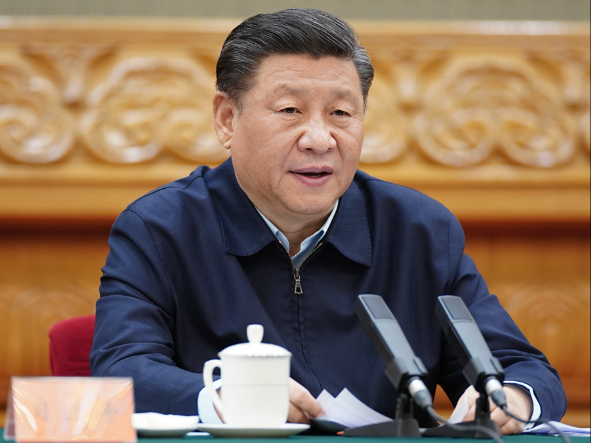 BEIJING, Oct. 21 (Xinhua) -- Chinese President Xi Jinping has called on the whole Party and society to respect heroes, learn from and care for them, so as to gather the mighty strength for the rejuvenation of the Chinese nation.

Xi, also general secretary of the Communist Party of China Central Committee and chairman of the Central Military Commission, made the remarks recently in a reply letter to all members of a sanatorium for disabled revolutionary military veterans in southwest China's Sichuan Province.

Xi extended his sincere greetings to all comrades of the sanatorium in his letter at a time when China is commemorating the 70th anniversary of the Chinese People's Volunteers (CPV) army entering the Democratic People's Republic of Korea in the War to Resist U.S. Aggression and Aid Korea.

In the letter, Xi said the CPV, carrying forward the great spirit of patriotism and revolutionary heroism, had marched forward gallantly, fought dauntlessly, and made vital contributions to safeguarding the motherland.

"The Party and the people will never forget the merits of the CPV members, heroes and role models," Xi said.

He noted that for more than six decades, the veterans at the sanatorium have been actively participating in patriotism and national defense education and constantly contributing to the Party and the people.

The Chinese nation has seen many heroes in history, and will continue to see more heroes in the new era, Xi stressed.

Built in 1951, the sanatorium has since then served more than 2,800 disabled veterans, among whom 2,200 had fought the War to Resist U.S. Aggression and Aid Korea.

The veterans at the sanatorium actively participated in educational activities promoting patriotism and national defense, and volunteered to join nearly 10,000 educational seminars with over 3 million audiences over the past six decades.

The sanatorium was honored as a national model unit for veteran work in 2019.

Tu Boyi, a CPV veteran, wrote to Xi recently on behalf of all the veterans at the sanatorium expressing their determination and unremitted commitment to contributing to the rejuvenation of the Chinese nation.