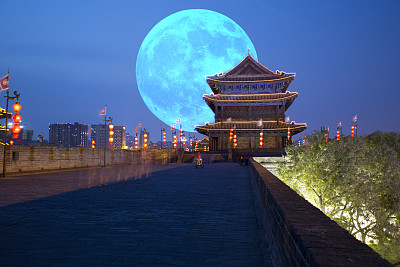 Xi'an City in Northwest China's Shaanxi Province has been approved as the ninth National Core City amid the country's massive efforts to develop western inland areas and increase connection with the Eurasian region.

The concept was proposed by the Ministry of Housing and Urban-Rural Development in 2005 as a first step in reforming urbanization in China. The National Core Cities are described as a group of cities in charge of leading, developing and performing political, economic and cultural tasks.

As the oldest of the Four Great Ancient Capitals in China, Xi'an will lead development in northwestern China, build close links with economic zones, and compete in the world production system, the Beijing News reported.

Xi'an's unique inland location also enables it to play an important role in China's One Belt One Road initiative, which consists of a network of railways, highways and other forms of infrastructure, as well as power grids, Internet networks and aviation routes in the Eurasian area.

According to development plans, Xi'an as a National Core City will strengthen comprehensive services and the opening-up of western China, boost prosperity and stability in the region, develop itself into a key economic center, as well as an international exchange center, a scientific innovation center, and a cultural and transportation hub.

Xi'an will embody all aspects of new notions of development and boost its ranking in international competition. It is expected that the city will turn itself into a home for offices of multinational companies and provide support to global capital as well as advanced manufacturing.

Efforts will also be made to increase innovation, promote the commercialization of scientific research, and organize international conferences and exhibitions.