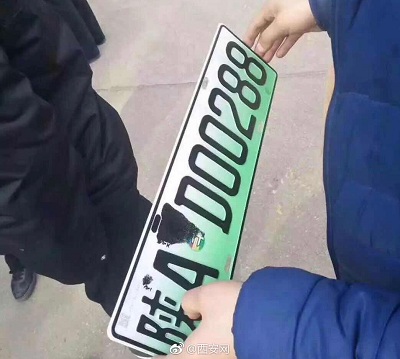 Northwest China's Xi'an City, capital of Shaanxi Province, started the use of the exclusive license plates for electric vehicles, Wednesday.
The green license plates for new energy vehicles (NEVs), different from the former blue plates, were introduced by the Ministry of Public Security in 12 cities in November as part of China's efforts to support NEVs.
Different from the old plates, the new license enjoys many benefits including being able to use bus lanes for the whole day and being free from traffic restrictions based on the last digit of license plate numbers.
Currently, many Chinese cities have adopted a traffic restriction scheme which keeps cars off the roads depending on the last digit of their plates.
NEVs are well supported in China, with subsidies for buyers and an expanding network of charging stations.
There are more than 1 million NEVs in China, with 825,000 being pure electric vehicles.