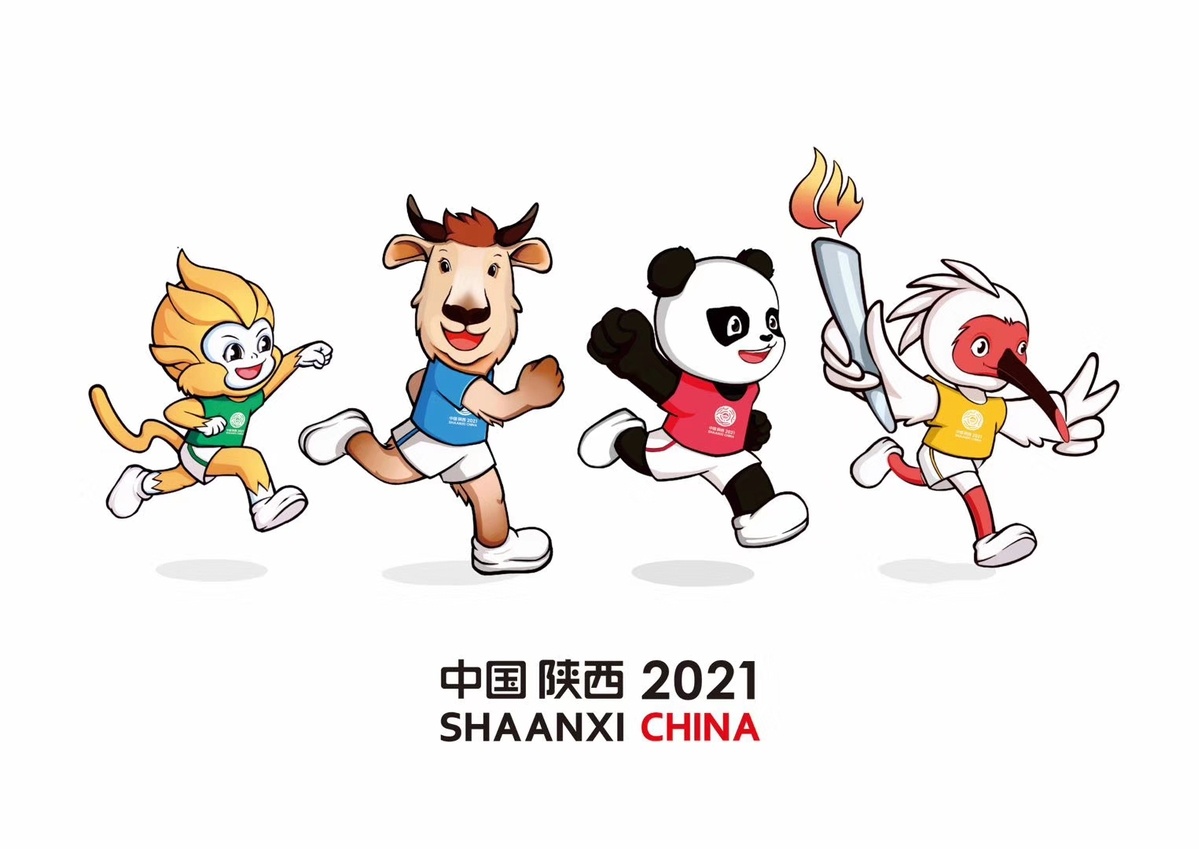 The mascots of the 14th National Games. (Photo: chinadaily.com.cn)

The upcoming quadrennial National Games are poised to ensure safety and order as its host city Xi'an, capital of Shaanxi province, has recently tightened COVID-19 prevention and control measures in preparation for the country's highest-level multisport event in September.

Xi'an prepared for a decade to bid for the opportunity of hosting the 14th National Games with the expectation that the event would further boost the development of the province－as well as China's central-western regions－and raise the public enthusiasm for sports.

All people going to the Games－athletes, coaches, service staff and spectators－will be required to take a nucleic acid test no more than 72 hours beforehand and anyone over age 12 is required to have been vaccinated for the novel corona-virus no less than two weeks before, organizers said.

At a news conference in late July, Ma Guanghui, deputy director of the Shaanxi Provincial Health Commission, said more than 20,000 athletes and technical officials throughout the country will go to Shaanxi for the competition. It is estimated that hundreds of thousands of spectators will attend the events, and the epidemic prevention and control work cannot be lax.

A meticulous set of COVID-19 control measures has been formed to protect public health at the Games.

For inbound travelers to Shaanxi, a 21-day centralized quarantine plus seven days of isolation in their hotel rooms－or home in the case of residents－will be required, Ma said, as well as nucleic acid tests and point-to-point seamless transportation services. People returning to Shaanxi from key border provinces and medium- and high-risk areas will be directly placed in isolation to undergo nucleic acid tests and a 14-day health monitoring.

Starting from the end of last month, some well-known tourist spots in Shaanxi have been closed, including the Emperor Qinshihuang's Mausoleum Site Museum and the Huaqing Palace.

Zhang Baotong, chairman of the Shaanxi Urban Economic and Cultural Research Association, said measures such as the closure of scenic spots have been taken to ensure the province has no problems leading up to the opening of the 14th National Games.

"As the first important national sports gala after the Tokyo 2020 Olympic Games, the National Games may be a window for observers from home and abroad to see the development of our sports industry and the effectiveness of our epidemic prevention and control," Zhang said.

Liu Tianqi, deputy director of the medical treatment and public health department of the Games' organizing committee, said the Games will keep athletes and media staff involved in the competition in isolation.

Spectators will be allowed to enter the venues, and tickets for the upcoming Games went on sale to the public on Thursday.

For the first time in the event's 62-year history, the competition－in 35 sports with 409 events－from Sept 15 through 27 will be held in China's central and western regions.

Earlier in August, residents in some areas of Xi'an were given nucleic acid tests as a protective measure for the Games.

The province has not had any new locally transmitted COVID-19 cases since July 1, according to the Shaanxi Provincial Health Commission.

Jiang Min, deputy director of the food and medicine safety department of the organizing committee, said the committee set up a food warehouse for athletes to store five categories of foods designed for them, including pork, beef, mutton, aquatic products, spices and seasonings.

"We will ensure the safety of all foods and make sure that there are zero incidents of foodborne (athletic performance) stimulants," she said.

The Games have brought some changes to Shaanxi.

An overall work plan for the 14th National Games was released in 2016, saying that 25 new and 16 refurbished competition venues were scheduled to be completed, with total investment of about 20.2 billion yuan ($3.1 billion).

According to the government report delivered by Governor Zhao Yide at the annual Shaanxi Provincial People's Congress in January, the construction of 51 competition venues for the National Games－10 more than originally planned－has been completed, laying a solid foundation for the competition to proceed as planned.

Baqiao district, in Xi'an's eastern suburbs, where the major stadiums for the National Games are located, became this year the part of the city with the densest subway line configuration.

Bai Yongxiu, an economics professor at Northwest University's School of Economics and Management in Xi'an, said thanks to the National Games, many sports and cultural and tourism facilities worthy of a major city, as well as urban infrastructure projects, have been able to secure funds for construction.

"Hosting the National Games will enhance the reputation of Xi'an and Shaanxi in the country," said Bai. "In the long term, the new competition venues will help boost the development of the sports industry not only in the province but throughout China.

"Sports is a multipurpose activity that will drive the development of regional cultural tourism to facilitate more people to know more about the culture in Xi'an," he added.

Residents of the ancient city are ready for the nation's highest-level sports meeting.

Wang Yawen, a 25-year-old student at Xi'an Jiaotong University, had as of July participated in over 10 training sessions for volunteer work at the Games.

"I feel fortunate to be a part of the 14th National Games," she said. "For me, it's a once-in-a-lifetime opportunity, and I really treasure it."

"Many people say Xi'an is rich in its historical resources, but the National Games are also helping us to see the more advanced and modern side of the city," Wang said.