CHINA Xi and food security: Grains in hand, no worry in heart

Xi and food security: Grains in hand, no worry in heart

China's food security has improved over the last five years, since China has introduced policies strengthening agriculture and benefiting farmers, and has carried out structural reforms on agricultural supply chains. 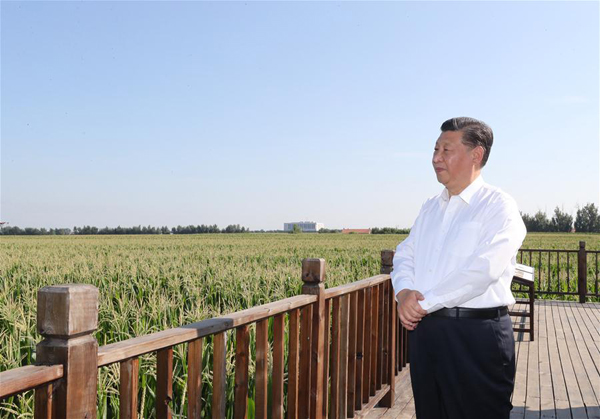 "I care very much about grain production and food security"

As a popular old Chinese poem goes, every grain of rice is the result of the farmer's toil. In an instruction Chinese President Xi Jinping gave in August this year, he said that despite consecutive bumper harvests, it is still necessary for China to maintain a sense of crisis. The impact of the COVID-19 pandemic this year has sounded the alarm for us.

"I care very much about grain production and food security. We need to maintain a good harvest this autumn after a bumper one in the summer."

Xi inspected Lishu County on July 22, the first stop of his trip in Northeast China’s Jilin Province, where he repeated the importance of food security.

From northeastern China with black soil, through central China to south of the Yangtze River, the land of fish and rice, food security has been a major concern of Xi.

Xi has stressed repeatedly that "to ensure the food for 1.4 billion Chinese people is China's top priority," "we need to hold steady the responsibility of food security" and "always have control over our own food supply."

The policy of strengthening agriculture and benefiting farmers has been introduced intensively, and structural reforms on the agricultural supply side have been intensified.

National grain production has been stabilized at more than 65 million kilos for five consecutive years and per capita grain possession of 472 kilos, which is far above the international standard for food security of 400 kilos.

China is food independent and has taken the strategic initiative to face further risks and challenges.

"Look at the rice field. We are having another bumper year!" laughed Yuan Shenghai, director of Jiucheng Cooperative of Rice Planting in Fuyuan, Heilongjiang Province.

Yuan remembered Xi's inspection of the cooperative on May 24, 2016. Xi said, "Food security is an important foundation of national security. We need to innovate in food production, optimize production technology, implement all supportive policies, protect farmers' enthusiasm for their work, and improve the income from food production" and "a professional cooperative for farmers is an efficient organization to increase their income and develop modern agriculture. We must do it right by concluding and publicizing advanced experience."

Inspired by Xi's words, Yuan, together with members of the cooperative, extended their operation to 2,267 hectares by growing crops in an environmental-friendly way.

They developed strains Yadaomi (duck rice) and Niqiudao (loach rice) and they also developed the brands of Jiucheng Fragrant Rice and Wusulixincheng Rice, popular in places like Beijing and Shanghai.

Technology is the key to national food security

Xi pointed out during his inspection in Lishu County on July 22 this year that "technology modernization is the key of agricultural modernization. We need further integrate agriculture and technology, strengthen innovation in agriculture technology. Researchers should do practical researches so that farmers can use the most advanced technology to grow the best crops."

"We are inspired by the president's words! We will grow more quality crops with advanced technologies," said Lu Wei, director of the Luwei Professional Cooperative of Agricultural Machines and Farmers.

The cooperative now has 54 machines for the whole process of farming including ploughing, soil-based fertilization and crossed corn planting.

The cooperative with such agricultural technologies and supporting mechanized equipment has yielded results.

Some 176 rural households have joined the cooperative. More than 1,133 hectares of land have been transferred, earning over 10,000 yuan yearly net income per hectare for members.

Based in Sanya, Hainan Province, Hainan National Breeding and Multiplication is also known as the "Silicon Valley of the Chinese seed industry" and a standing warehouse for seed supply.

Its base has over 70 percent of about 7,000 new species of agricultural products cultivated since the establishment of the People's Republic of China in 1949. 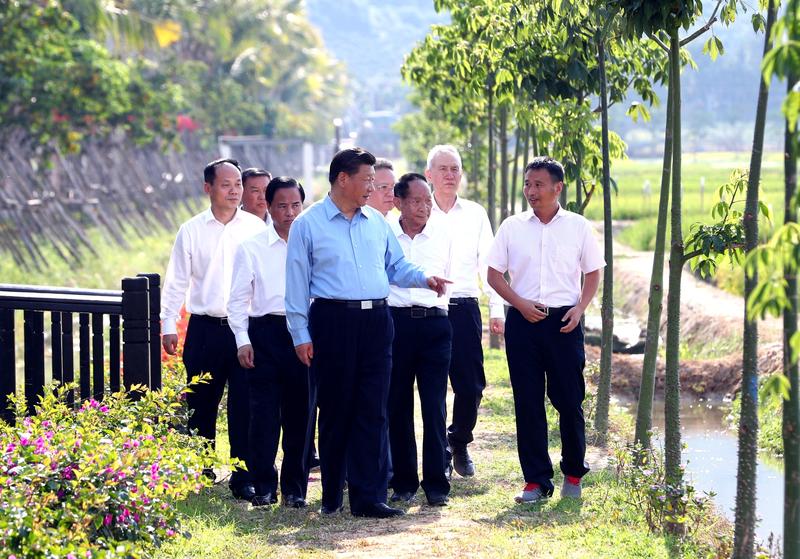 Chinese President Xi Jinping talks with Yuan Longping (third right) and other agricultural experts at the Nanfan Scientific and Research Breeding Base in Sanya, Hainan province, in April.

Xi pointed out during his inspection of the base on April 12, 2018 that "improved strains are the key to improved food production. We must be dedicated to develop the Chinese seed industry, accelerate to cultivate quality strains with intellectual property rights to safeguard national food security from the source."

"We will put more efforts to cultivate strains of a higher quality for wide application," said Zhu Renshan, a rice expert and a professor at the College of Life Sciences in Wuhan University.

Zhu has spent 20 Chinese new years at the base. The Honglian hybrid rice he promoted has not only been planted in China, but been exported to southeastern Asian countries including The Philippines, Vietnam and Indonesia.

In the past five years, China has made great efforts to promote agricultural technology. National comprehensive mechanization of the ploughing, sowing and harvesting of crops has reached 70 percent. The whole process of growing wheat, rice and corn is basically mechanized. Improved strain coverage is maintained at over 96 percent, accounting for over 45 percent in agricultural growth.

Farmland is the root of food production.

Xi stressed during his inspection in Henan Province in September 2019 that "we need to improve farmland protection and fertility and faster develop farmland of high quality." 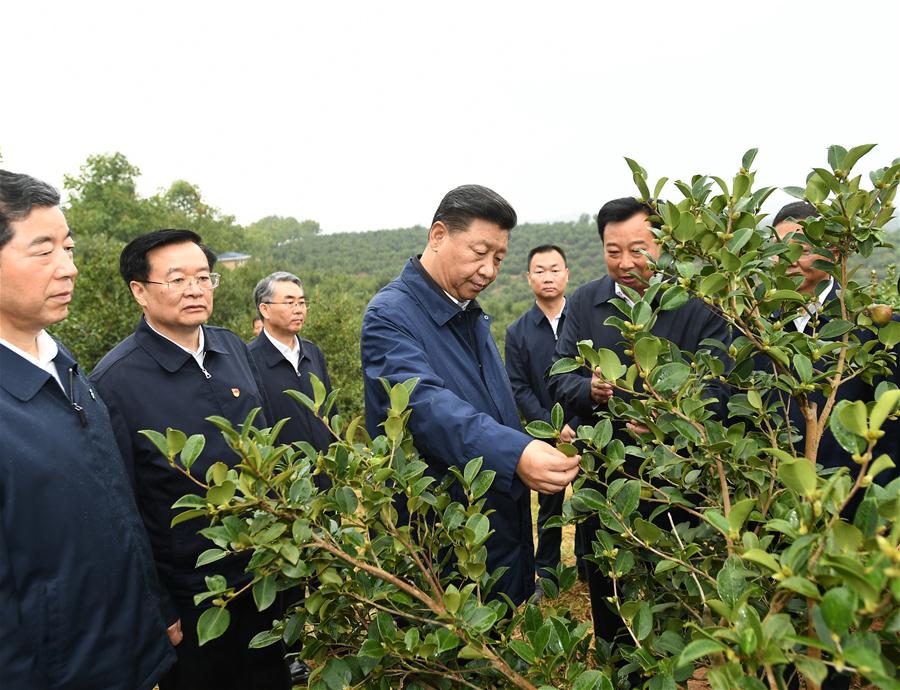 Shen still remembered Xi's inspection of the comprehensive development and demonstration zone of quality grain fields on May 9, 2014.

"He was in my field saying 'I used to be a farmer like you. I'm glad to see a bumper wheat crop. In your words, we will have steamed bread to eat this year.'"

Crop growing in the village has become easier in recent years with new wells, roads and ditches. "We are no longer dependent on nature anymore. Now we irrigate with a remote control and spray pesticide with drones. The arid land has become a cradle of wealth," said Shen.

Weishi government has invested 874 million yuan ($130 million) since 2016 to develop 48,533 hectares of high-standard farmland with 27.6 million kilos of crop increased in the zone, according to Liu Jifeng, an official from the Department of Agriculture and Rural Affairs of Weishi County.

Boasting black earth, northeastern China is a key production zone for crops and the biggest base for commercial crops.

"President Xi stressed during his inspection in Jilin that we need to summarize and promote the developing mode of Lishu County, take concrete measures to protect and utilize the black earth for the benefit of people," said Li Baoguo, professor of the College of Land Science and Technology in China Agricultural University. Li has been dedicated to scientific research in the county for more than 10 years.

"Straws on the land surface helps increase the amount of organic matter in the topsoil," said Li, "It softens the soil, in which corn can now take root of deeper than 1 meter."

China implemented a pilot zone of protection and use of black earth in northeastern China in 2015. Based on the latest action plan, the zone will see 93 million hectares of land of protective farming by 2025.

Protect the profits of farmers

The protection of food security involves the participation of hundreds of millions of farmers.

"Policymakers need to improve the efficiency of crop production and increase farmer's income to ensure both advance at the same pace. Neither farmers nor a county of large crop production should suffer an economic loss," Xi said during his inspection of Xiaogang Village, Fengyang County of Anhui Province on April 25, 2016.

Cheng Xibing from Xiaogang Village rented 39 hectares, of which 27 were planted with paddy fields.

Li said more than 60 percent of the total 1,000 hectares of farmland was transferred. Villagers are now shareholders, he said.

"We need to stick to the people-centered philosophy of development in promoting modern agriculture and cultural tourism of characteristics. We need to put farmers and their profits first and explore a more efficient and lasting mechanism for interests connection," Xi said while inspecting a rural ecological park in Helan County, Ningxia Hui Autonomous Region on June 9 this year. 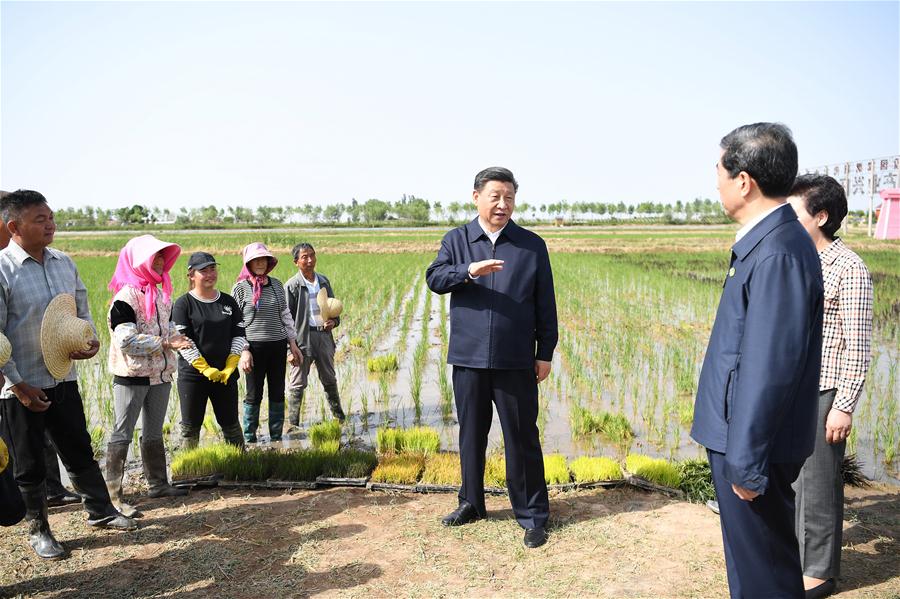 "We are assured with income of land lease, service charge and dividends by the end of year," said Chen Hongjun from Sishilidian Village in Changxin Town, Helan County.

"I'm more confident in developing modern agriculture after I listened to the president's words. I will lead villagers and share profits with them," said Zhao Jianwen, director of the ecological park.

Some 485 households have seen improved incomes and there are field schools for 3,860 farmer students.

With innovative operating systems all over China, the number of family farms is approaching 60,000, cooperatives 2.2 million and 37,000 socialized service organizations dedicated to agricultural production management. The profits of 3 million new operational entities and farmers are connected.