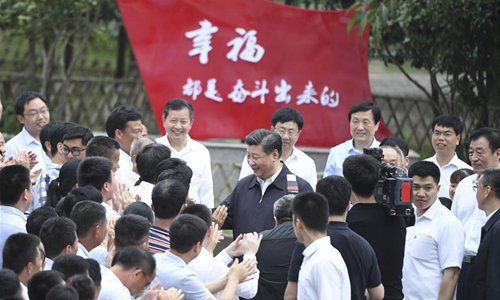 Chinese President Xi Jinping, also general secretary of the Communist Party of China Central Committee and chairman of the Central Military Commission, visits a memorial hall marking the departure of the Long March by the Central Red Army in Yudu County, Ganzhou City, during an inspection tour of east China's Jiangxi Province. Xi on Monday visited an old revolutionary base area in the south of Jiangxi Province during the inspection. (Photo: Xinhua)

Chinese President Xi Jinping said that "we are on a new Long March now" during his inspection tour of Jiangxi Province this week and encouraged people to gain strength from the spirit of the Long March to overcome difficulties and obstacles, China's state media outlets reported on Thursday.

Xi, also general secretary of the Communist Party of China (CPC) Central Committee and chairman of the Central Military Commission, made the remarks during his inspection tour of East China's Jiangxi Province from Monday to Wednesday.

People's Daily, China Central Television and the Xinhua News Agency all reported on Xi's inspection tour, and his remarks about the new Long March were highlighted.

Arriving in Yudu county in Jiangxi, Xi paid tribute to a monument marking the departure point of the Long March by the Central Red Army and met families of Red Army veterans.

The Long March (1934-36) was a massive military operation undertaken by the Red Army, forerunner of the People's Liberation Army, to retreat from its revolutionary bases in South China and escape the encirclement and pursuit of the Kuomintang army.

Noting that China was on "a new Long March," he said in Yudu that the country will depend on the firm faith and the strong will of the whole Party and all people to overcome major challenges at home and abroad and secure new victories in building socialism with Chinese characteristics.

China must be clear-headed about the long-term, complex nature of unfavorable domestic and international factors and well prepared for any difficult circumstances, Xi emphasized, adding that the most important thing for China is to do its own job well.

Song Luzheng, a research fellow at the China Institute of Fudan University in Shanghai, told the Global Times on Thursday that "the Long March has at least three characteristics: The enemy was much more powerful than us. The process was very long and tough. Through the march, we won nationwide support and gained eventual victory."

The trade war with the US and the Long March share some similarities, Song said, but overcoming the pressures and difficulties brought by the US-provoked trade war was not the final goal for the new Long March. "It's just another obstacle in the march," he said.

"The final goal could be the great rejuvenation of the Chinese nation in the middle of this century," said Su Wei, a professor at the Party School of the Communist Party of China Chongqing Municipal Committee.

According to a report about Xi's inspection tour published by the People's Daily on its second page on Thursday, Xi said that Chinese should make a pledge to the next 70 years in 2019, which marks the 70th anniversary of the founding of the People's Republic of China.

"In the next 70 years, the key is the next 30 years," as it is the period for China to realize the goals of establishing an overall well-off society and realizing the great rejuvenation of the Chinese nation, Xi said.

Just like the Red Army in the Long March, "as long as we hold firm ideas and faith and strong revolutionary determination, we can overcome obstacles one by one. Those traps, encirclements, pursuits and blockade lines will be left behind by us," Xi said.

Talk of "traps, blockade lines and encirclements" made people think of what the US has done to Chinese companies like Huawei, Su believed. "It sounds like the leader is encouraging those firms that are under pressure from the US."

After the Long March ended in 1936, the CPC fought the War of Resistance against Japanese Aggression (1931-45) and totally defeated the Kuomintang (1945-1949) to expel it from the Chinese mainland and founded the People's Republic of China in 1949.

Even 1949 did not mark the end, Su told the Global Times.

"The CPC also needed to overcome other challenges afterward including the Korean War in the early 1950s. The CPC or China's struggles with their enemies are always long and tough, and they never start the fight, but are always forced to join the fight," Su said.

"From the Long March to the present, the CPC's enemies are always seems to be much more powerful including the Kuomintang, Japanese imperialist and the US, and the key is that the CPC has never been defeated, and it can always grow after every fight."

Mentioning the Long March, Su said, "will also encourage the people and the whole Party that the difficulties at this moment are real, but they are nothing compared to the situations that we have experienced in the past, and we should have confidence."

According to Xinhua, describing Jiangxi as a land full of revolutionary history and memories, Xi called for a deep understanding of the hard-earned establishment of the political power of the CPC, the People's Republic of China and socialism with Chinese characteristics, and demanded greater efforts to carry forward the revolutionary spirit and traditions.