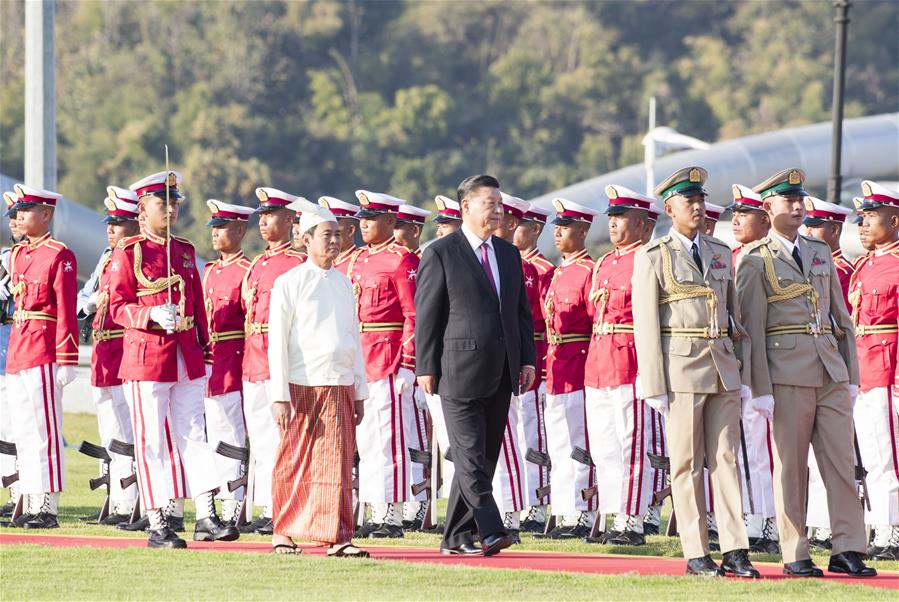 Chinese President Xi Jinping inspects the guards of honor in the company of Myanmar President U Win Myint during a grand welcome ceremony at the presidential palace in Nay Pyi Taw, Myanmar, Jan. 17, 2020. (Xinhua/Huang Jingwen)

Xi arrived earlier Friday for a state visit to the Southeast Asian country. It is Xi's first overseas trip in 2020, and the first visit to the Asian neighbor by a Chinese president after an interval of 19 years.

Accompanied by Myanmar leaders including the president and State Counsellor Aung San Suu Kyi, Xi stepped into the banquet hall at the presidential palace.

In his speech, U Win Myint said that Xi visits Myanmar as his first foreign trip in the new year, and the Myanmar people are deeply honored by that. He expressed gratitude for China's support and assistance to Myanmar's peace and development.

Myanmar and China have always adhered to the Five Principles of Peaceful Coexistence, respected and understood each other, and have been committed to developing closer cooperative partnership, he said.

U Win Myint said he believes that Xi's visit will become an important milestone in the development of bilateral relations, and wished Xi a successful and fruitful visit.

For his part, Xi said he appreciates the hospitality of the Myanmar government and people.

He said the reason why the "Paukphaw" (fraternal) friendship between the two countries can last thousands of years and become ever stronger is that they have always been sincere to each other, stood together through thick and thin, and adhered to mutual respect and mutual benefit.

Looking into the future, the two sides should take the opportunity of the 70th anniversary of their diplomatic relations to jointly build a China-Myanmar community with a shared future and usher in a new era of bilateral ties, he said.

Xi urged the two countries to continue to be good neighbors like passengers in the same boat, and create a more favorable environment for their people's work and life and for their economic and social development.

They should persist in being good friends who share weal and woe, and continue to work together to promote the Five Principles of Peaceful Coexistence, firmly support each other's major concerns, and jointly promote world peace, stability, prosperity and development, he said.

They should also continue to be good partners for win-win cooperation, and push the China-Myanmar Economic Corridor into substantive construction to bring greater benefits to the two peoples, said the Chinese president.

He also urged the two sides to be good brothers to pass on their friendship from generation to generation.

Xi expressed his belief that in the new year, China and Myanmar will continue to help each other, and work together for new progress in their respective national development and write a new chapter in their friendship.