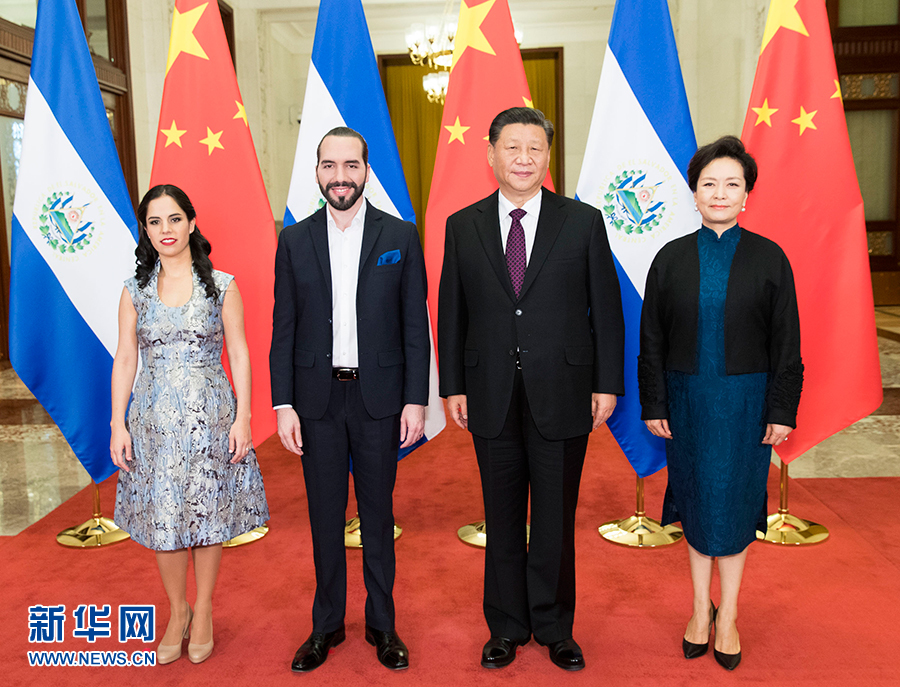 Welcoming Bukele's first state visit to China, Xi said the establishment of diplomatic relations between China and El Salvador is a landmark event in the history of the bilateral relationship.

"The establishment of diplomatic ties opens the door of bilateral cooperation, conforms to the trends of historical development and accords with the fundamental interests of both peoples," said Xi.

Hailing the sound development of bilateral ties in the past year, Xi spoke highly of Bukele's decision to maintain and develop China-El Salvador ties.

"You have shown strategic vision as a statesman and shouldered historical responsibility," Xi told Bukele during the talks at the Great Hall of the People.

China stands ready to work with El Salvador to enhance mutual trust, expand exchanges and cooperation on the basis of mutual respect and non-interference in each other's internal affairs in order to further promote bilateral ties to a new level, Xi said.

He called on both sides to enhance cooperation in areas of infrastructure construction, agriculture, quality supervision, energy, water conservancy and science and technology to benefit the two peoples.

China welcomes El Salvador to participate in the Belt and Road construction and stands ready to import more high-quality products such as sugar and coffee from El Salvador, Xi said.

Xi said many of those who visited China from El Salvador have said that they viewed China as a mystery before they came but were fascinated after they arrived.

China welcomes more people from El Salvador to visit and is willing to intensify people-to-people exchanges and mutual understanding so as to build a solid and broad social foundation for the lasting, healthy and stable development of bilateral ties.

Bukele said the people of El Salvador pay close attention to and pin high hopes on his visit to China.

Calling China a great nation that plays an important role in the international arena, Bukele said he admires China's splendid history and culture and remarkable achievements.

Though the two countries forged diplomatic ties only a year ago, they enjoy great potential and can definitely be each other's good friends, said Bukele.

He said he believes that developing relations with China can bring El Salvador more opportunities and benefits for its people.

Expressing his hope to learn from Xi's experience of governance, Bukele said he is committed to developing a long-term friendship with China and developing relations with China in parallel with other major bilateral ties.

He said his country appreciates China's assistance and looks forward to cooperation with China in areas of investment, trade, infrastructure construction, agriculture, tourism, culture and science and technology as well as the Belt and Road construction.

Bukele said he hopes his visit can be a new starting point for El Salvador-China ties and open up a bright future for bilateral relations.

After the talks, the two presidents witnessed the signing of a series of bilateral agreements. The two countries also issued a joint statement on Tuesday.

Bukele arrived in China on Sunday for a six-day state visit at the invitation of Xi.