CHONGQING, April 17 (Xinhua) -- Chinese President Xi Jinping has called for greater efforts to win the battle against poverty on time and realize the goal of building a moderately prosperous society in all respects as scheduled. 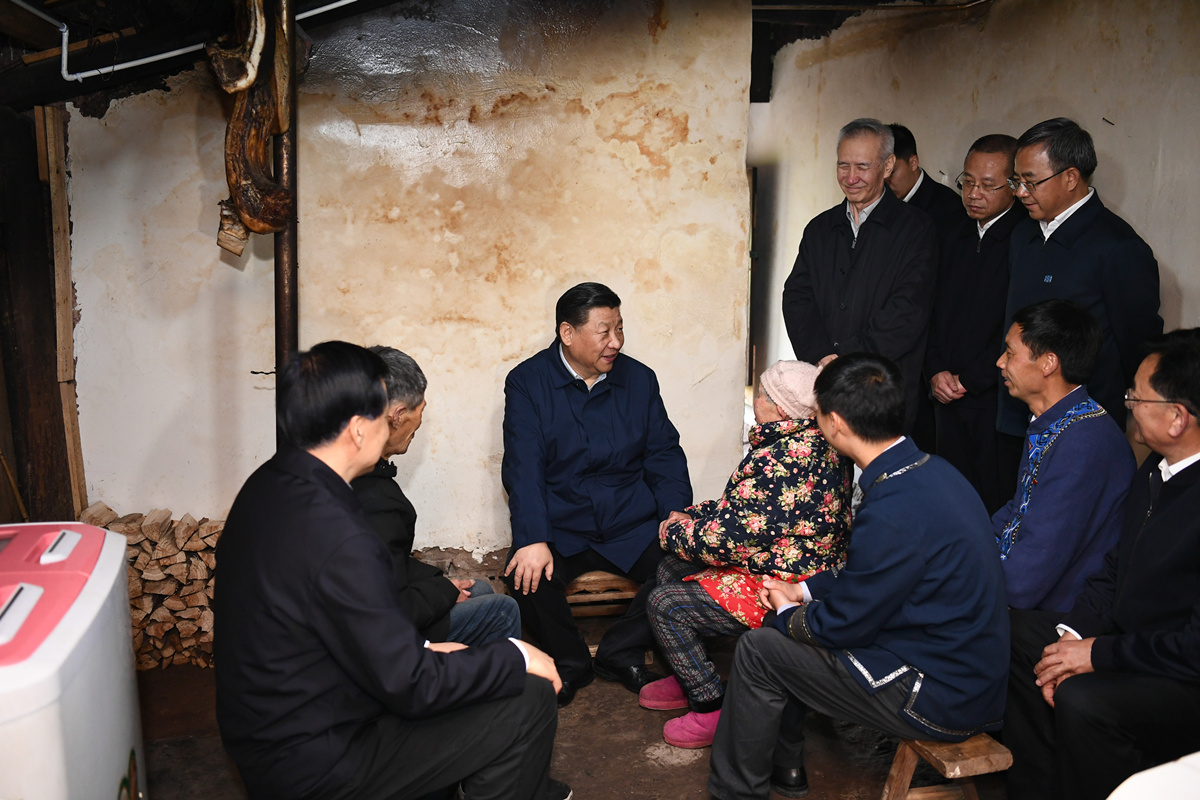 Xi, also general secretary of the Communist Party of China (CPC) Central Committee and chairman of the Central Military Commission, made the statement during an inspection tour to southwest China's Chongqing Municipality from Monday to Wednesday.

During the inspection, Xi also presided over and delivered a speech at a symposium to address the problems concerning the basic living needs of rural poor populations and their access to compulsory education, basic medical services, and safe housing.

VISITS TO THE POOR

After arriving in Chongqing, the president took an over-three-hour trip, by train and then by road, to a mountainous village in Shizhu Tujia Autonomous County on Monday.

When visiting a primary school there, Xi promised to ensure children in poor mountainous regions go to school and have a happy childhood.

Stopping by the house of Tan Dengzhou, an impoverished villager, Xi learned that Tan and his wife were unable to work due to illness and thus faced financial difficulties.

People who still live under the poverty line or slip back into poverty due to illness should be the priority of poverty alleviation projects, Xi said, adding that they should receive support such as minimum-living allowances, medical insurance and medical aid.

At the home of Ma Peiqing, a veteran CPC member who has shaken off poverty, Xi sat in the yard, chatting with the villagers, primary-level officials and village doctors.

"Not a single person should be left behind in the building of a moderately prosperous society in all respects," Xi said. "Socialism means development. Development must serve the common prosperity for everyone."

He told the CPC members and cadres to work on the frontline in fighting poverty.

At the symposium Tuesday afternoon, Xi said that the basic requirement and key indicator for the poverty alleviation goal by 2020 are that rural poor people have no worry about food and clothing and have access to compulsory education, basic medical services, and safe housing.

At the crucial stage in winning the battle against poverty, heads of Party committees and governments at the provincial level should take up their responsibilities, he said.

Efforts should be made to work out detailed and concrete measures, target genuinely poor households, and prevent the reoccurrence of poverty to those who had been lifted out, according to Xi.

In addition to deepening the campaign against corruption and improper conduct in poverty alleviation, Xi also called for timely compensation and long-term support to families of officials who have sacrificed their lives to the cause.

After hearing the work reports from Chongqing's Party and government officials Wednesday morning, Xi hoped that Chongqing will act as a major drive in boosting the development of China's western region in the new era, play a leading role in promoting the joint construction of the Belt and Road, and become a model in advancing green development of the Yangtze River Economic Belt.

Xi asked Chongqing to take the lead in the western region to firmly promote the reform and opening-up and meticulously prepare for and carry out the events celebrating the 70th founding anniversary of the People's Republic of China.

They were also instructed to foster high-caliber officials that are loyal, clean and responsible, and crack down on the practice of formalities for formalities' sake and bureaucratism.