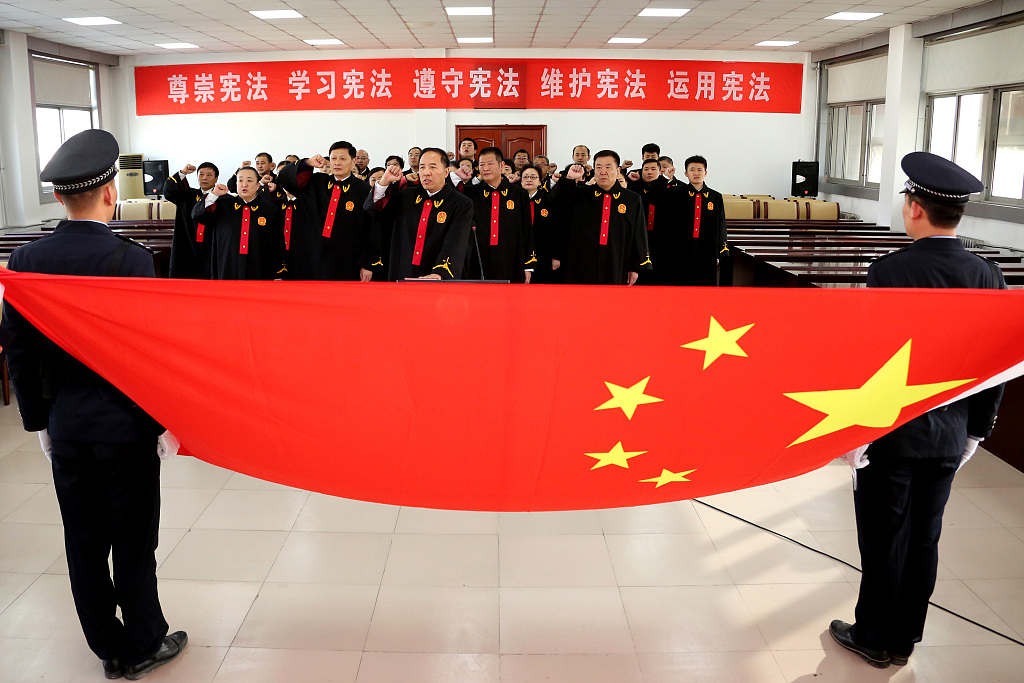 The judges of the People's Court of the Central District, Zaozhuang, East China's Shandong Province solemnly swear upon the national flag on December 4, 2018. (Photo: VCG)

Xi, also general secretary of the Communist Party of China (CPC) Central Committee and chairman of the Central Military Commission, called for making efforts to guide all people to loyally uphold, willingly comply with and firmly safeguard the socialist rule of law.

It's necessary to develop effective and comprehensive institutions to ensure compliance with the Constitution, strengthen constitutional oversight and safeguard its authority, so as to elevate constitutional enforcement to a new level, he said.

Educational campaigns should be launched within the entirety of the Party and society to promote the spirit of the Constitution and establish its authority, said Xi.

The General Office of the National People's Congress (NPC) Standing Committee jointly held a symposium in Beijing Tuesday with the Publicity Department of the CPC Central Committee and Ministry of Justice on how to thoroughly study and implement the Constitution and unswervingly advance reform and opening-up.

At the meeting, Li Zhanshu, a member of the Standing Committee of the Political Bureau of the CPC Central Committee and chairman of the NPC Standing Committee, stressed it was important to thoroughly study and implement Xi's important speech and instruction on the Constitution, promote the spirit of the Constitution and safeguard its authority under the centralized, unified leadership of the CPC Central Committee with Xi at the core.

Li said the current Constitution is a good law that fits in China's reality and meets the development demand of the times, which must be resolutely safeguarded, adhered to on a long-term basis, and implemented in a comprehensive way.

Li also stressed the importance of taking Xi Jinping Thought on Socialism with Chinese Characteristics for a New Era as the guide and improving the Chinese socialist system of laws, at the heart of which is the Constitution.

Wang Chen, a member of the Political Bureau of the CPC Central Committee and vice chairman of the NPC Standing Committee, presided over Tuesday's symposium and conveyed Xi's instruction.