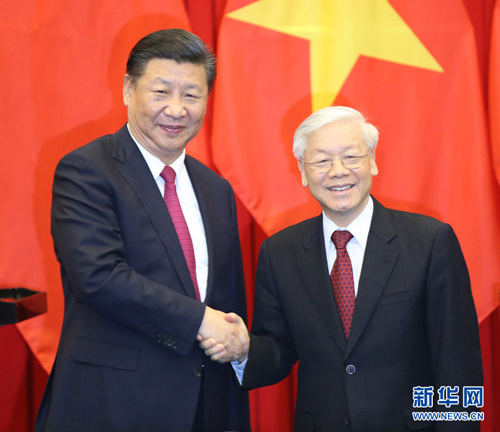 In the message, Xi said he is glad to hear that Trong has been elected as the general secretary of the CPV Central Committee, and would like to extend warm congratulations to him, and through him to the new CPV central leadership, on behalf of the CPC Central Committee and in his own name.

Since its 12th National Congress, the CPV, under the strong leadership of the CPV Central Committee headed by Trong, has strengthened party building and led the Vietnamese people to a series of achievements in the cause of socialist construction and reform, Xi said, adding that the successful convention of the 13th National Congress of the CPV has started a new journey in Vietnam's socialist modernization.

Xi said he believes that under the leadership of the new CPV Central Committee headed by Trong, new greater achievements will be made in the various causes of the CPV and Vietnam.

China and Vietnam are friendly socialist neighbors and also a community with a shared future of strategic significance, said Xi.

Xi said he attaches great importance to relations between the two parties and between the two countries, and stands ready to work with Trong to enhance strategic communication, promote traditional friendship, deepen exchanges and cooperation in various fields, and promote the cause of socialism.

In so doing, he added, they will jointly steer the China-Vietnam comprehensive strategic cooperative partnership along the path of sustained, healthy and stable development, bring more benefits to the people in both countries, and make positive contributions to promoting regional and global peace, development and win-win cooperation.