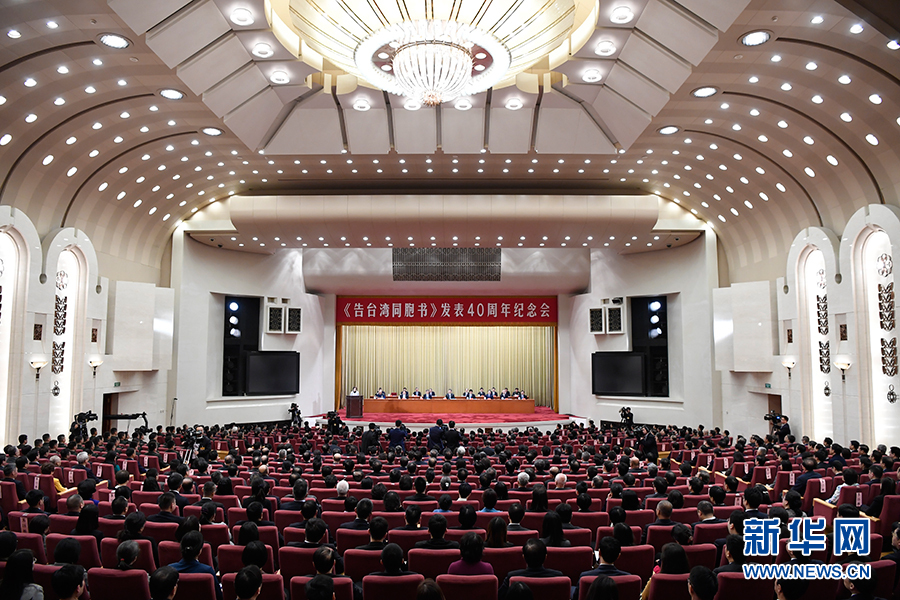 A gathering to commemorate the 40th anniversary of issuing Message to Compatriots in Taiwan is held at the Great Hall of the People in Beijing, Jan 2, 2019. (Photo: Xinhua)

A gathering started Wednesday morning at the Great Hall of the People to commemorate the 40th anniversary of issuing Message to Compatriots in Taiwan.

Chinese President Xi Jinping delivered a speech at the gathering.

Since 1949, the Communist Party of China (CPC), the Chinese government and the Chinese people have always unwaveringly taken resolving the Taiwan question to realize China's complete reunification as a historic task, Xi said.

Xi highlighted the breakthrough progress made in the cross-Strait relations since 1949, at a gathering on Wednesday to commemorate the 40th anniversary of Chinese mainland's Message to Compatriots in Taiwan.

Over the 70 years, estrangement between the mainland and Taiwan was ended in line with the common will of compatriots across the Strait, and Taiwan compatriots have made great contributions to the reform and opening-up in the mainland, said Xi, who is also general secretary of the Communist Party of China (CPC) Central Committee and chairman of the Central Military Commission.

During the seven decades, the mainland and Taiwan reached the 1992 Consensus based on the one-China principle, and the political exchanges across the Strait have reached new heights, Xi said.

He continued that more and more countries and peoples have understood and supported the cause of the reunification of China over the 70 years.

Furthermore, over the 70 years, a series of major victories in the battles against "Taiwan independence" and separatists have been achieved, Xi said.

Xi stressed that achieving the country's greatness, national rejuvenation and cross-Strait reunification is the trend of history, which can never be blocked by anyone or any force.

The historical and legal facts, that Taiwan is part of China and the two sides across Taiwan Strait belong to one and the same China, can never be altered by anyone or any force, said Xi.

The fact that compatriots across the Strait are all Chinese who share natural kinship and national identity can never be changed by anyone or any force, Xi added.

The peaceful and stable development of cross-Strait situations and the progress of cross-Strait relations are the tide of the time that can never be stopped by anyone or any force, said Xi.

China must be, will be reunified

China must be and will be reunified, Xi said Wednesday.

"It is a historical conclusion drawn over the 70 years of the development of cross-Strait relations, and a must for the great rejuvenation of the Chinese nation in the new era," he said.

He called on Chinese people across the Taiwan Strait as well as at home and abroad to work together for the Chinese nation's greater good and go with the tide of history, to jointly push forward the peaceful development of the cross-Strait relations and advance the process toward the peaceful reunification of China.

The Taiwan question originated from national weakness and disorder, and will definitely end with national rejuvenation, Xi said.

The Chinese people on both sides of the Taiwan Strait should make joint efforts to seek national reunification, Xi said.

Peaceful development of cross-Strait relations should be pushed forward, maintained and shared by compatriots on both sides of the Strait, he said.

The principles of "peaceful reunification" and "one country, two systems" are the best approach to realizing national reunification, Xi said Wednesday.

On the basis of ensuring China's sovereignty, security and interests of development, the social system and way of life in Taiwan will be fully respected, and the private property, religious beliefs and legitimate rights and interests of Taiwan compatriots will be fully protected after peaceful reunification is realized, Xi said.

"We are all of the same family. The cross-Strait affairs are domestic affairs and should naturally be addressed through discussion and consultation by ourselves," Xi said.

As long as the one-China principle is upheld, there will be no obstacles in exchanges between political parties and groups in Taiwan and the mainland, Xi said.

Political parties and all sectors on both sides of the Strait may recommend representatives to conduct extensive and in-depth democratic consultation on the basis of the common political foundation of upholding the 1992 Consensus and opposing "Taiwan independence," Xi said.

Xi pledges utmost sincerity for peaceful reunification, makes no promise to abandon use of force

Xi has pledged "utmost sincerity and greatest efforts" for the prospect of peaceful reunification, but he made no promise to abandon the use of force.

While noting that "Chinese don't fight Chinese," Xi said peaceful reunification is in the best interests of compatriots across the Strait as well as the Chinese nation.

"We make no promise to renounce the use of force and reserve the option of taking all necessary means," he added.

This does not target compatriots in Taiwan, but the interference of external forces and the very small number of "Taiwan independence" separatists and their activities, he said.

"Taiwan independence" goes against the trend of history and will lead to a dead end, he said.

"We are willing to create broad space for peaceful reunification, but will leave no room for any form of separatist activities," he added.

Taiwan to be guaranteed lasting peace after peaceful reunification

Taiwan will be guaranteed lasting peace after peaceful reunification, Xi said on Wednesday.

Xi called for efforts to deepen the integrated development across the Taiwan Strait to consolidate the foundation of peaceful reunification, adding that "Chinese people should help each other."

Both sides should enhance the free flow of trade, connectivity in infrastructure, exchange of energy and resources, and shared industrial standards, said Xi.

There are no problems that cannot be solved between family members, Xi said. "We sincerely hope all the compatriots in Taiwan treasure peace as much as they treasure their own eyes, and pursue national reunification as much as they pursue happiness."

Xi urged young people across the Strait to shoulder important tasks with courage, be united and friendly with each other, and strive for a better future hand in hand.

"We cordially welcome young people from Taiwan to cherish, pursue and fulfill their dreams on the mainland of our motherland," he said.

Taiwan question allows no interference from outside

China's reunification does not harm any country's legitimate interests, including their economic interests in Taiwan, Xi said.

It will only bring more development opportunities to other countries, inject more positive energy into the prosperity and stability in the Asia-Pacific region and the world, and make greater contributions to building a community with a shared future for humanity, to world peace and development, and to the cause of human progress, he added.