BEIJING, March 21 (Xinhua) -- Chinese President Xi Jinping delivered a video speech to the Colombian people at the invitation of his Colombian counterpart, Ivan Duque, as the third batch of COVID-19 vaccines provided by China arrived in Bogota, capital of Colombia, on Saturday local time.

"Even mountains and seas cannot distance people with common aspirations," Xi said in his speech, noting that the vast Pacific Ocean cannot stand in the way of the profound friendship between the Chinese and Colombian people.

Over the past 41 years since the establishment of their diplomatic ties, the China-Colombia relations have achieved historic development, Xi said, with China becoming Colombia's second largest trading partner and China-invested enterprises actively participating in Colombia's development in various fields.

Cultural and people-to-people exchanges between the two sides are flourishing, and the China-Colombia friendship is deeply rooted in the hearts of the two peoples, Xi said.

In the face of the unexpected COVID-19 outbreak, Xi stressed that the two countries have worked in unity to help each other overcome difficulties and actively carried out anti-pandemic cooperation. 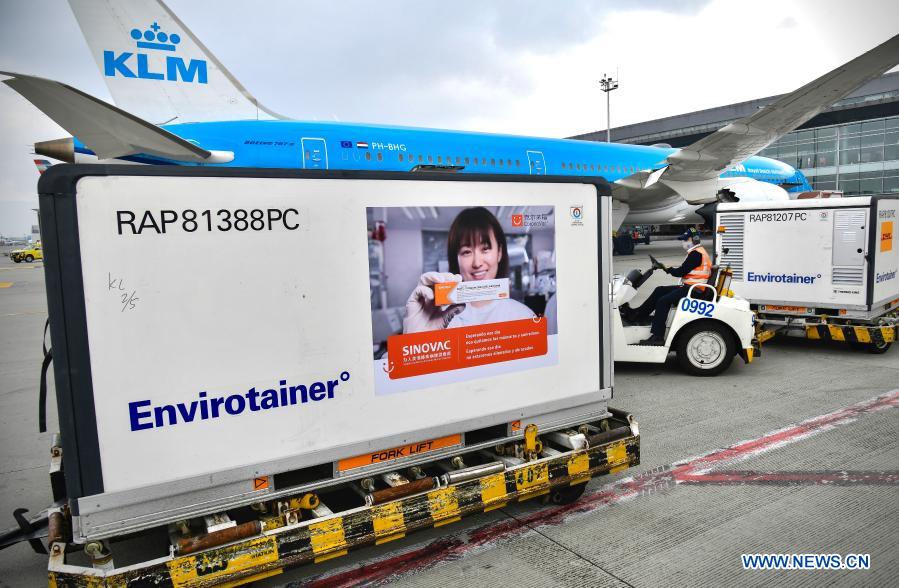 Photo taken on March 6, 2021 shows a container of the second batch of COVID-19 vaccines from Chinese company Sinovac at the El Dorado International Airport in Bogota, Colombia. (Photo: Xinhua)

Two batches of Chinese vaccines purchased by Colombia have been delivered to the South American country not long ago, Xi said, adding that the latest batch of vaccines arrived today to help boost the national vaccination program of Colombia.

Xi said he hopes that the governments and peoples of the two countries will make joint efforts to strengthen friendly cooperation in various fields including the anti-pandemic fight, so as to elevate China-Colombia friendly cooperation to a new level from a new historical starting point and bring more benefits to the two peoples.

Duque, who was on a tour of inspection during the day, held a special ceremony and broadcasted Xi's speech to the whole country. He expressed gratitude to Xi and the brotherly Chinese people for their deep friendship to the Colombian people and their important support to Colombia's fight against the pandemic.

Duque said that developing relations with China is a broad consensus among different political groups in Colombia, and the country is ready to work with China to continuously deepen bilateral relations.