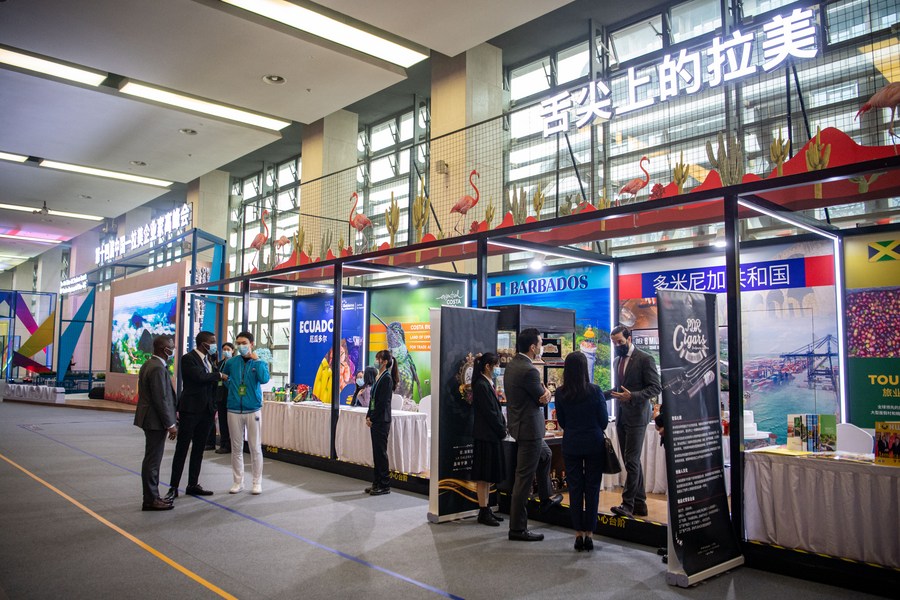 People visit an exhibition during the 14th China-Latin America and the Caribbean Business Summit in southwest China's Chongqing on Nov. 16, 2021. (Photo: Xinhua)

Xi pointed out that China will adhere to the basic national policy of opening up, firmly pursue a win-win strategy of opening-up, keep to the right direction of economic globalization, continue to provide new opportunities for the world with China's new development, promote the building of an open world economy, and deliver more benefits to the people of all countries including Latin American and Caribbean countries (LAC).

He noted that since its inception 15 years ago, the China-Latin America Entrepreneurs Summit, with a focus on serving enterprises, has played an important role in promoting China-Latin America economic and trade cooperation, as well as deepening bilateral people-to-people exchanges.

China-Latin America relations have entered a new era of equality, mutual benefit, innovation, openness and shared benefits, he said, adding that the business community is a new force for China-Latin America practical cooperation, as well as a builder and beneficiary of the growth of bilateral ties.

It is hoped that friends from the business community will continue to uphold the indomitable and pioneering entrepreneurship spirit, and act as promoter of open development, leader of innovative development, and practitioner of shared development in a bid to make new and greater contributions to promoting the building of the China-LAC community with a shared future, Xi said.

On the same day, Ecuadorian President Guillermo Lasso attended the opening ceremony of the summit and delivered a speech.