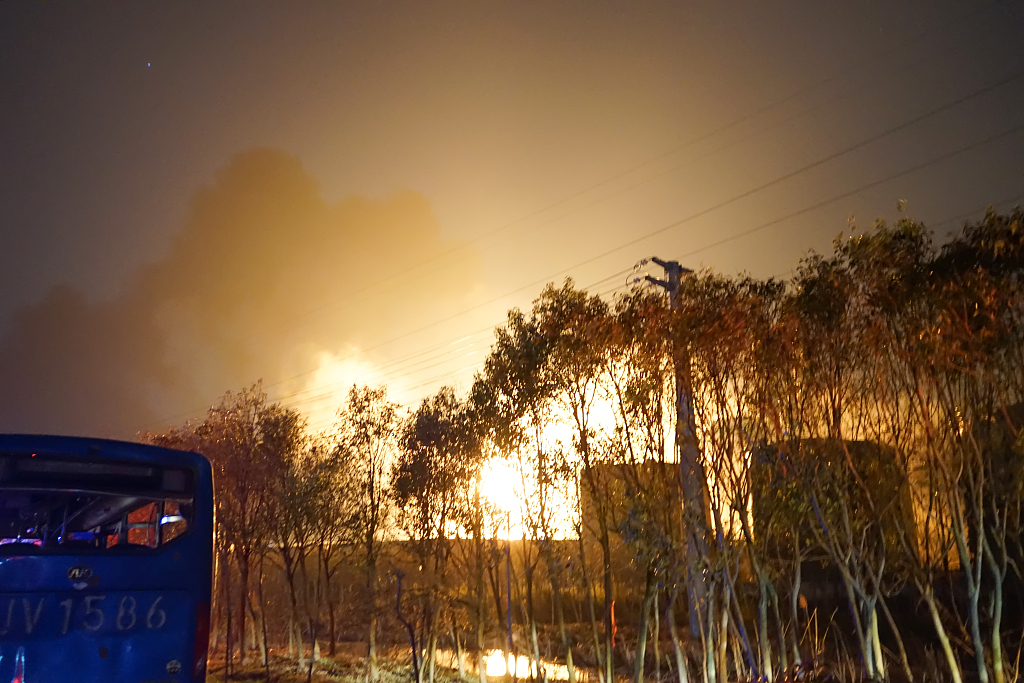 The scene of the factory explosion is witnessed in Yancheng, Jiangsu Province, March 21, 2019. (Photo: VCG)

Xi, also general secretary of the Communist Party of China (CPC) Central Committee and chairman of the Central Military Commission, made the instructions on his tour of overseas visits.

Xi said all-out efforts must be made to search those trapped, and the injured must be timely treated and relief work must be well done to maintain social stability. Meanwhile, environment monitoring and early warning should be strengthened to prevent environmental pollution as well as secondary disasters.

The explosion happened at about 2:48 p.m. Thursday following a fire that broke out in a chemical factory located in an industrial park in Xiangshui County of Yancheng City, according to local authorities.

The explosion has affected 16 surrounding enterprises. Open fire has been put out and air pollution indexes are within the allowed range.

Xi ordered that the causes of the accident must be identified as early as possible and that authoritative information should be timely released.

As major safety accidents had successively happened in different places recently, Xi instructed local governments and relevant departments to learn the lesson hard, tighten safety hazard check, seriously implement the accountability system for workplace safety, so as to ward off major and severe safety accidents and ensure the safety of people's lives and property.

Premier Li Keqiang, also a member of the Standing Committee of the Political Bureau of the CPC Central Committee, required that efforts must be made to minimize the casualties while forceful measures on hazard control must be taken to prevent secondary accidents.

The ministries of emergency management and ecology and environment have both sent work teams to the site.

A state-level medical expert squad comprising intensive care, burn, trauma and neurosurgery specialists and psychological intervention experts were on their way to Xiangshui.