BEIJING, May 24 (Xinhua) - Chinese President Xi Jinping said Monday that China stands ready to make active efforts with Vietnam to build the two countries into a community with a shared future that bears strategic significance. 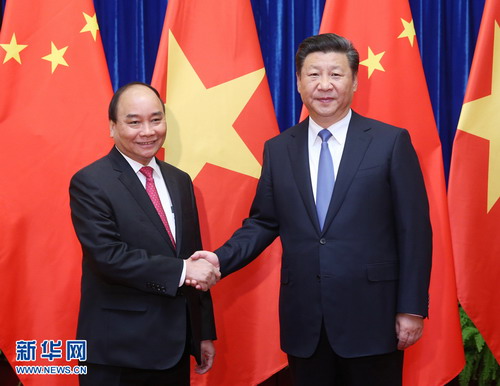 He made the remarks in a telephone conversation with Vietnamese President Nguyen Xuan Phuc, and asked the latter to convey his sincere greetings to General Secretary of the Communist Party of Vietnam Central Committee Nguyen Phu Trong.

The Communist Party of China is about to celebrate its centenary, China has embarked on a new journey of fully building a modern socialist country, and Vietnam is also striving to achieve its two centenary goals, Xi noted.

The two sides, he suggested, should view and grasp the relations between the two parties and countries from a strategic and long-term perspective and set the right direction for China-Vietnam relations to move forward.

The Chinese party and government firmly adhere to a friendly policy towards Vietnam, and appreciate that the new leadership of Vietnam continues to give top priority to relations with China in its foreign policy, Xi said.

He added that China is willing to work with Vietnam to stay true to the original aspiration of their traditional friendship, bear in mind the ideals and historical missions shared by the two sides, and continuously make their comprehensive strategic cooperation more relevant in the new era, so as to inject new impetus into the development of relations between the two parties and countries as well as their socialist causes.

Xi stressed that the two sides should continue to leverage the special advantages of their inter-party exchanges to deepen experience sharing on state governance.

They should give full play to the coordination role of the China-Vietnam Steering Committee for Bilateral Cooperation, and promote high-quality synergy between the Belt and Road Initiative and Vietnam's "Two Corridors and One Economic Circle" plan, he added.

Xi also called for concerted efforts to continuously expand bilateral trade, speed up infrastructure connection, and fully tap the cooperation potential of new business forms and new driving forces, so as to better serve the economic and social development of both countries.

The two sides, Xi added, should strengthen people-to-people exchanges, accelerate the implementation of China-aided projects for public well-being in Vietnam, and bring more results of their win-win cooperation to people in both countries.

They should also carry on the good tradition of unity and mutual support, join hands to effectively handle and control the COVID-19 pandemic, and substantively protect the people's lives and health, Xi said.

China, he said, stands ready to continue to provide as much assistance as its capacity allows for Vietnam's fight against the pandemic.