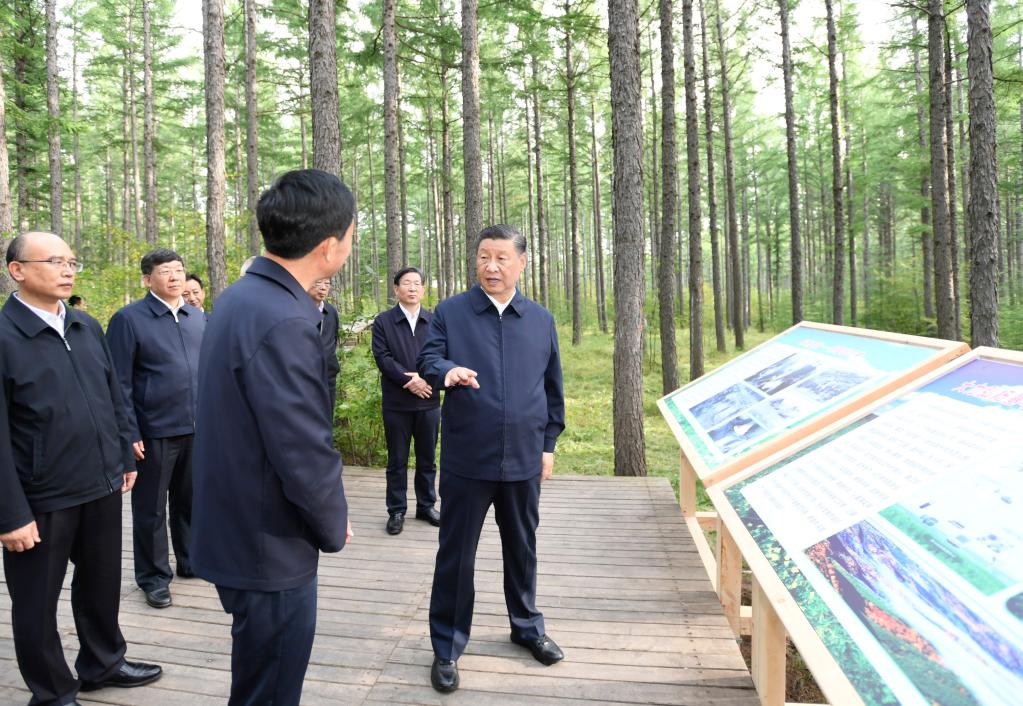 Chinese President Xi Jinping, also general secretary of the Communist Party of China Central Committee and chairman of the Central Military Commission, checks the growth of the trees and learns about the promotion of the Saihanba spirit and the high-quality development of the Saihanba forest farm at a forest named after Wang Shanghai, a late official of the farm, in north China's Hebei Province, on August 23, 2021. (Photo: Xinhua)

BEIJING, March 31 (Xinhua) -- China has demonstrated to the world during the last decade that its promise to reduce emissions and tackle climate change is not empty rhetoric.
On Wednesday, President Xi Jinping planted trees at a park in Beijing's southern district of Daxing. This is the 10th year for him to participate in the annual voluntary tree-planting activity in the capital city.
Speaking on the occasion, Xi, also general secretary of the Communist Party of China (CPC) Central Committee and chairman of the Central Military Commission, said he did so to make his contribution to building a beautiful China and to encourage the whole of society, especially the young people, to push for ecological advancement so that China's environment will become even better.
During the last decade, China adopted unprecedented measures for safeguarding the environment, from controlling air, water and soil pollution to conserving existing green ecosystems as well as adding new forests, grasslands and wetlands.
Behind China's environmental endeavors is Xi's persistent emphasis on promoting ecological civilization, as his hallmark green development phrase "lucid waters and lush mountains are invaluable assets" has become a maxim in the country.
Through his active involvement in voluntary tree planting, Xi has set an example of ecological preservation for the whole country. Over the past decade, he planted saplings of various species in different areas across the capital.
It's worth noting that Xi was joined by children in the tree-planting activities. He talked with them, asking about their studies and urging them to boost awareness about environmental protection.
"People plant trees so their offspring can enjoy the shade," he once cited the Chinese proverb during a tree-planting activity.
In Beijing, the forest coverage rate increased from 40 percent to 44.6 percent from 2013 to 2021.
Green trees and blooming flowers can be spotted in a park in Beijing's Tongzhou district. This is where Xi took part in a tree-planting activity in 2019.
"The environment has improved significantly here," said Zhang Hongfeng, a local resident, adding that the area once suffered from pollution but has seen great changes after a set of measures were taken in recent years.
Thanks to the afforestation efforts, 64 million hectares of trees have been planted in China over the past decade. The country's forest coverage has now reached 23.04 percent, up 2.68 percentage points from 2012.
The country's environmental efforts have garnered international acclaim. In 2017, China's Saihanba afforestation community won the Champions of the Earth award, the highest environmental honor of the United Nations.
At present, the ecological civilization in China has entered a critical period for eco-environment improvement, Xi said, calling for unswerving implementation of the new development philosophy and following the path of prioritizing ecological conservation and boosting green development.