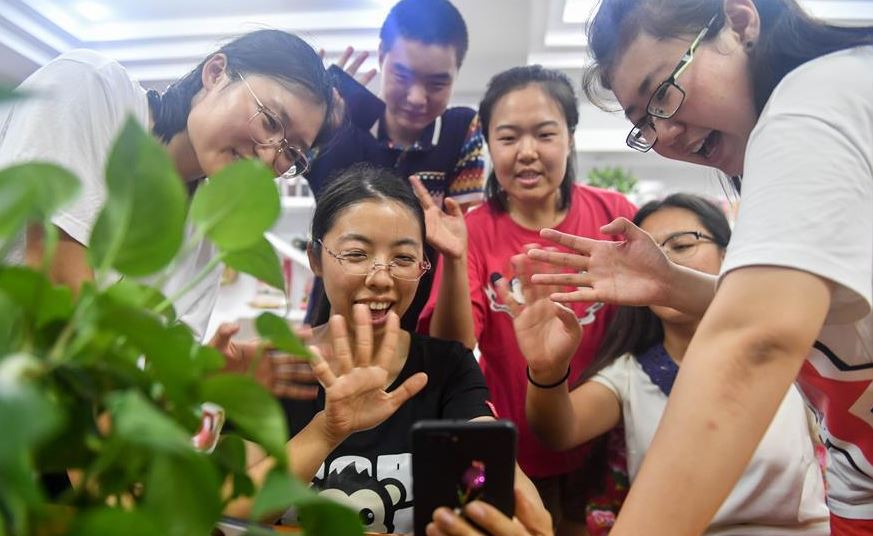 YINCHUAN, Aug. 13 (Xinhua) -- When many of his peers were busy pursuing their dreams in big cities, Yang Ke gave up high-paying jobs and headed to the countryside in northwest China's Ningxia Hui Autonomous Region to serve local residents last year.

"Going back to serve the villagers is a mature decision for me," said Yang, 29, a graduate with a master's degree in public policy at the Tianjin-based Nankai University, one of the top universities in China. "Education has changed me, and I want to change the countryside."

Yang was born and raised in a poor village in Ningxia. Before graduation, Yang worked as an intern at an internet company and worked to establish his own start-up, but he said he always wanted to give back to the rural areas.

"I spent one month in a community in the southwestern Tibet Autonomous Region as part of my college project, and I felt very comfortable being with villagers, so I made up my mind to return to the countryside."

President Xi Jinping has underscored the importance of carrying on the spirit of arduous struggle by the Chinese youth and demanded they always maintain their fine tradition of forging ahead.

Instead of taking opportunities in big cities, some Chinese college graduates like Yang choose to serve the countryside through a national program of selecting excellent college graduates to rural areas for a short term to hone their skills and cultivate young talents.

The graduates work at the grassroots level to accumulate experience for some time, before being selected to different job positions at various levels.

In Ningxia, for instance, 652 college graduates were selected to work in the region's countryside from 2013 to 2018, according to official data.

"They are young but open-minded and can bring vitality to the countryside, where local officials are traditionally older, less educated and are even unable to use a computer," said He Yuankai, an official who previously worked in Ningxia's Qingtongxia City.

President Xi has urged Chinese youth of the new era to hone their abilities.

"In recent years, many young people with ambitions and responsibilities have chosen to work diligently and devote themselves to the western region, contributing to local economic and social development and ethnic unity," Xi wrote in a letter that was made public in 2014.

For the selected graduates, the countryside has undoubtedly proven to be an excellent place to enhance their abilities.

To better unleash their potential, the selected graduates are put to villages and assigned tasks of poverty alleviation. Yang's battlefield is in Tongxin Village, about 30 kilometers away from Qingtongxia City, which still has many villagers living under the poverty line.

After arriving in the village in December, Yang conducted door-to-door surveys about people's conditions and found out that rural children lacked proper education resources.

"Education is a critical strategy to reduce poverty, but also a way for village kids to change their fate," Yang said. Therefore, he set up a tutorial class, teaching more than 40 village students math, physics, and English in his office, free of charge, during their winter vacation.

As he was busy with village affairs in the day and teaching classes at night, Yang often had to eat supper after 9 p.m. every day, or even later. Due to a lack of facilities, students often had to bring their own stools to class.

For this summer vacation, Yang decided to expand his teaching team and applied for support from his college. He later expanded the team to 12 teachers and received subsidies from local authorities. The class was settled in the local primary school. Within just one week, it attracted more than 120 students from the village and its vicinity.

Yang acts as a security guard in the school and also a part-time teacher. In class, he designed a special lesson called "Dream Your College" for the students.

"I can feel their strong sense of inferiority caused by poverty or by a lack of knowledge," said Yang. "So I ask the students to picture their college life, and I also encourage them to learn for a better future with my own story."

As long as the young people are brave enough to shoulder responsibilities and fight hardships and risks, socialism with Chinese characteristics will be full of vitality, potential and hope, President Xi has said.

For Yang, even though teaching gives him a sense of satisfaction, poor living conditions in the countryside do cause embarrassment for him, particularly in the hot summer, when there is no way to take showers in the village.

"I do feel puzzled sometimes when seeing my classmates surf by the seaside on social media, while I can't even take a shower," said Yang. "But the villagers are so lovely because they give you a thumbs-up in support of what you do."

Like Yang, Hu Binbin, 27, a graduate of the prestigious Peking University with a master's degree in administration management, was also assigned to work in Qingtongxia City. After two years of work, she has become head of a township women's federation.

She always tells local housewives to be confident and self-sufficient, and uses all her resources to raise money for poor families.

"I can't remember how many times I was asked why I chose to come back to the countryside, but I want to help rural people, and I believe the young generation can realize their value even in rural areas," she said.