CHINA Xi Focus: Getting off to a good start

Xi Focus: Getting off to a good start 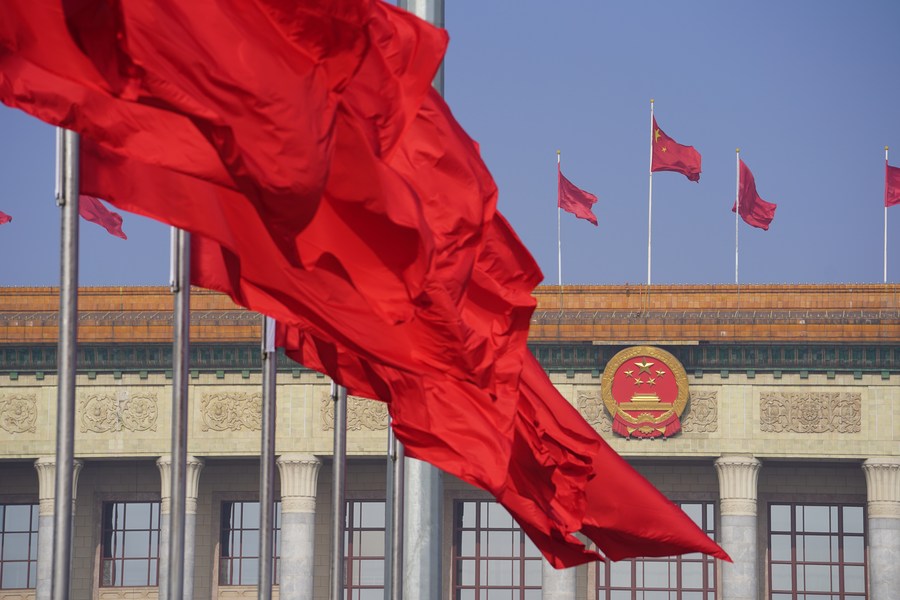 Photo taken on May 22, 2020 shows flags on the Tian'anmen Square and atop the Great Hall of the People in Beijing, capital of China. (Photo: Xinhua)

BEIJING, Aug. 15 (Xinhua) -- In 2021, the Communist Party of China (CPC) has marked its centenary and the nation began to implement the 14th Five-Year Plan, getting off to a good start to fully build a modern socialist country.

Under the leadership of the CPC Central Committee with Xi Jinping at the core, China has witnessed steady and sound economic growth since the beginning of the year. New progress has been made in the country's high-quality development, and the Chinese people enjoy a stable social environment.

He called on the over 190 provincial and ministerial-level officials at attendance to strive for a good start in fully building a modern socialist country.

About two weeks later, chairing a group study session of the Political Bureau of the CPC Central Committee, Xi reiterated the need to ensure sound economic and social development this year, as the "first step" of the 14th Five-Year Plan is crucial.

According to Xi, during the 14th Five-Year Plan period, China should work to fulfill commitments in various areas, including the promotion of high-quality development, satisfying people's expectations for a high-quality life, and achieving sci-tech self-reliance at a higher level. The country has also begun to fast-track vitalizing the countryside.

Xi demanded a steady pace to achieve progress. And progress does come about across the board, from economic growth to environmental protection, rule of law, and national defense.

On top of the list of tasks in the 14th Five-Year Plan is strengthening scientific and technological innovation. This year, Xi has inspected several sci-tech companies, where he repeatedly highlighted the importance of self-reliance and self-strengthening in high-level sci-tech innovation.

Green is a hallmark of high-quality development. On his inspections across the country so far this year, Xi has underscored the importance of eco-environment protection in each trip.

Progress has also been made on other fronts. The country has expanded its opening-up with concrete measures, with a guideline to support high-level reform and opening-up of the Pudong New Area in Shanghai and a negative list for cross-border trade in services in its southern island province of Hainan, among others.

High-quality development should be firmly integrated with meeting people's aspirations for a better life, Xi noted.

"Let's work together for a better life," Xi said.

In his other tours of rural areas, Xi has expounded on issues including common prosperity, rural industries and agricultural science. Policies to strengthen grain security, develop the seeds industry and modernize farming have been rolled out.

The pace of growth of rural residents' income was 3.4 percentage points faster than that of their urban counterparts.

To address problems of wide public concern, a series of policy reforms have also been carried out, ranging from easing the burden of students, optimizing birth policies, to improving the healthcare system.

For a better world

In 2021, humanity is still struggling with COVID-19 and its variants. The world is also facing rising uncertainties caused by unilateralism, isolation and confrontation.

China has chosen to contribute its part for a better world.

On August 5, in a written message to the first meeting of the international forum on COVID-19 vaccine cooperation, Xi declared that China will provide 2 billion doses of COVID-19 vaccines to the world and offer 100 million U.S. dollars to COVAX this year.

China's commitment was welcomed by the international community. The World Health Organization issued a statement, expressing gratitude for China's contribution and noting that the country's efforts "will help save lives around the world."

On January 25, at the World Economic Forum Virtual Event of the Davos Agenda, Xi called on the world to "let the torch of multilateralism light up humanity's way forward."

"The problems facing the world are intricate and complex. The way out of them is through upholding multilateralism and building a community with a shared future for mankind," he said.

To keep in close contact with the world amid the pandemic, Xi had 50 phone calls with foreign leaders and heads of international organizations this year. On July 6, he also met virtually with over 500 leaders of political parties and organizations in more than 160 countries, calling for shouldering responsibility for the pursuit of people's well-being and progress of mankind.

"We believe that when the interests of the whole of humanity are at stake, China must step forward, take action, and get the job done," Xi said at the Davos Agenda event in January.

"Over the past century, the CPC has made extraordinary historical achievements on behalf of the people. Today, it is rallying and leading the Chinese people on a new journey toward realizing the second centenary goal," Xi said at the CPC's centenary celebration on July 1.

However, the new journey is by no means a smooth one.

Still, under Xi's leadership and with a striving spirit, the Chinese people are confident in prevailing over all difficulties on the way forward.

In April, visiting a memorial park dedicated to the Battle of the Xiangjiang River during the Long March in the 1930s, Xi recalled the great spirit of the indomitable Red Army.

"We should bear in mind such faith while striving to achieve the second centenary goal and realize the Chinese Dream of national rejuvenation," Xi said.