BEIJING, Jan. 31 (Xinhua) -- A puck zips around the rink so quickly that it's hard to keep up. Wearing a full-body suit, Bahe Dana is ready to dive, slide, and jump back up into a ready stance at a moment's notice.

At an outdoor rink in Northwest China's Xinjiang Uygur Autonomous Region, 8-year-old Bahe Dana is learning how to play ice hockey goalie. "I like this game because it's cool to play and you can get to ice skate," says Bahe, one of the first generation in China to grow up with ice hockey. 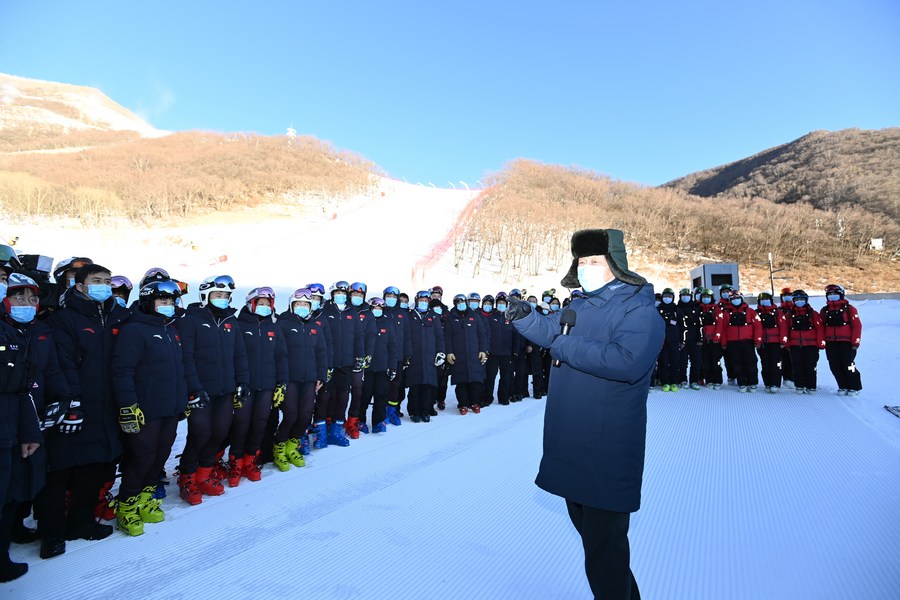 Winter sports in China was once considered a foreign and unaffordable pastime, but thanks to a drive initiated by President Xi Jinping, more are now taking to ice rinks and ski slopes.

● A promise made to the world

On July 31, 2015, the International Olympic Committee (IOC) awarded the 2022 Winter Olympics to Beijing, making the Chinese capital the first city to host both the Summer and Winter Games.

"The 2022 Olympic Winter Games, if held in China, will boost exchanges and mutual understanding between the Chinese and other civilizations of the world, encourage more than 1.3 billion Chinese to engage in winter sports with interest and passion, and give them yet another opportunity to help advance the Olympic movement and promote the Olympic spirit," said Xi.

A long-time sports fan, Xi once pointed out that sport is an important way to improve people's health and fulfill their aspirations for a better life.

That explains why he has pledged to get more than 300 million Chinese people on skis and skates, and why health has been incorporated into Beijing's second Olympic journey.

To make skiing more accessible to the public, hundreds of new facilities are being built. Five years ago there were only 460 ski resorts in China, but by the end of 2019, that figure had jumped to 770, according to a white paper on China's winter sports industry.

Some 2,000 primary and secondary schools across the nation had included winter sports in their curriculum by the end of 2020.

During Xi's latest visit this month to Beijing's Yanqing District, he underscored the 2022 Games' role in developing China's winter sports, especially snow sports, and expressed his hopes that hosting the Winter Olympics would contribute to China's goal of becoming a global sporting power.

"With these 300 million people engaging in winter sports, we can clearly say the history of winter sports will be one before Beijing 2022 and one after the Winter Games in Beijing. So it's really a landmark event for the global development of winter sports," said IOC president Thomas Bach.

Just as China used the 2008 Summer Olympics to push its economic and social development, Xi also intends to use the 2022 Games as a catalyst to promote sustainable economic growth not only in Beijing, but in areas surrounding the capital.

The 2022 Winter Olympics will serve as a driving force for coordinated development in Beijing, Tianjin and Hebei Province, Xi noted during an inspection tour to Zhangjiakou four years ago.

This promise is in line with the IOC's Olympic Agenda 2020, which aims to make the Olympic Games fit into the long-term development plan of a city and region.

To the delight of the IOC and Xi, the 2022 Games have already had an important effect on sustainable development in Beijing and its neighboring areas.

Chongli was once an extremely poor county in Zhangjiakou with a limited agricultural income. In 2015, 16.8 percent of the 100,000 residents in this county were classed as living below China's national poverty line.

But this mountainous town, where most of the 2022 Winter Olympics' snow events will be staged, has been transformed into a skier's paradise thanks to booming tourism. In 2019, the New York Times named Chongli as one of 52 ski destinations worth visiting.

In May 2019, Chongli was officially lifted out of poverty. Nearly 30,000 of its 126,000 population are employed by ski resorts or related companies and organizations.

Thanks to the Beijing-Zhangjiakou high-speed rail link that opened at the end of 2019, it took Xi less than 50 minutes to cover the 200 kilometers between the two cities during his latest inspection tour, a trip he flew four years ago when he last inspected the Beijing 2022 co-host city.

Cost control, especially relating to environmental costs, has become an important issue for the organizers of any Olympics in the modern age.

During his first visit to Zhangjiakou in 2017, Xi stressed that construction projects should not be extravagant, and that their follow-up uses should be taken into consideration.

For Beijing 2022, a crucial solution has been the reuse of venues from the 2008 Summer Olympics.

The iconic 'Water Cube' swimming venue from 2008 has now become the 'Ice Cube,' a premier curling venue. In Beijing 2022's Shougang competition zone, world-class facilities have been repurposed from a disused steel plant that used to exist on the site.

A strong focus on sustainability can also be found throughout previous years.

The 2022 Games are the first to harness waste carbon dioxide to create ice surfaces.

In addition, during the venue construction in the Yanqing competition zone, protecting species diversity on the 2,000 meter-high mountain was a top priority. All trees within the zone were registered and had their profiles marked with a QR code. Temporary migration paths were also built for local animals.

China's unswerving commitment to sustainability has won praise from observers.

Bach proclaimed that Beijing 2022 can "set a new benchmark for a sustainable Olympic Games."

That was echoed by International Paralympic Committee (IPC) President Andrew Parsons, who said Beijing is "taking the lead on sustainability in order to create a new model for the Olympic and Paralympic Games."

"Uphold the Olympic spirit, advance peace and development," read the message by President Xi, who has devoted himself to boosting global harmony and cooperation through sport.

During President Xi's state visit to Finland in 2017, he and Finnish President Sauli Niinisto agreed to designate the year of 2019 as the China-Finland Year of Winter Sports, which was described as "a historic form of cooperation for both countries."

Calling the game a demonstration of friendship between the Chinese and Russian teens, Xi told Putin that China is willing to work with Russia on exchanges and cooperation in sports such as ice hockey.

With many nations feeling isolated and the world still grappling with the COVID-19 pandemic, China's endeavor of promoting the Olympic ideal of universal solidarity can help to draw the world back together.

"We need this solidarity to be able to address the great challenges of humankind. There is not only the virus and maybe future health challenges. This is about a sustainable development in a holistic way," said Bach.