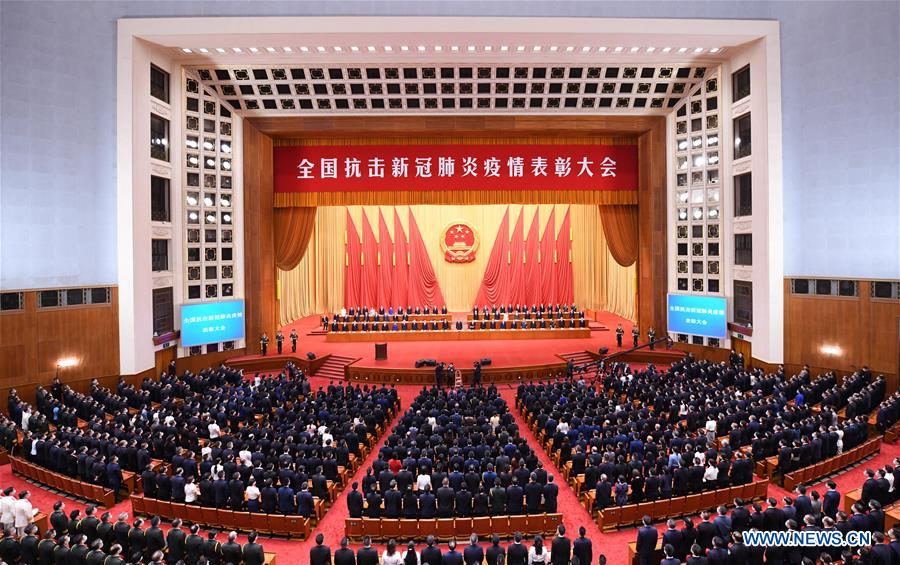 A meeting commending role models in the country's fight against the COVID-19 epidemic is held at the Great Hall of the People in Beijing, capital of China, Sept. 8, 2020. (Photo: Xinhua)

Xi, also general secretary of the Communist Party of China (CPC) Central Committee and chairman of the Central Military Commission, highlighted the spirit at a meeting to commend role models in China's fight against the COVID-19 epidemic held in Beijing.

During the fight against the epidemic, people's lives have always been put front and center, Xi said, adding that China is willing to do whatever it takes to protect people's lives.

No efforts were spared in saving every life, no matter it was a 30-hour old baby or centenarian, reflecting the CPC's concept of exercising governance for the people, Xi said.

Xi underscored the spirit of respecting science in China's fight against coronavirus.

"Faced with an unknown infectious disease, we uphold the spirit of science," Xi said.

The laws of science were followed in making decisions, treating patients, making technological breakthroughs, and governing society, he said.

The Chinese people have also shown a sense of mission in contributing to the world's efforts to defeat the COVID-19 outbreak, Xi said.

He stressed that China had launched the most intensive and wide-ranging emergency humanitarian assistance actions since the founding of New China to provide a steady driving force for the global efforts in fighting the pandemic.