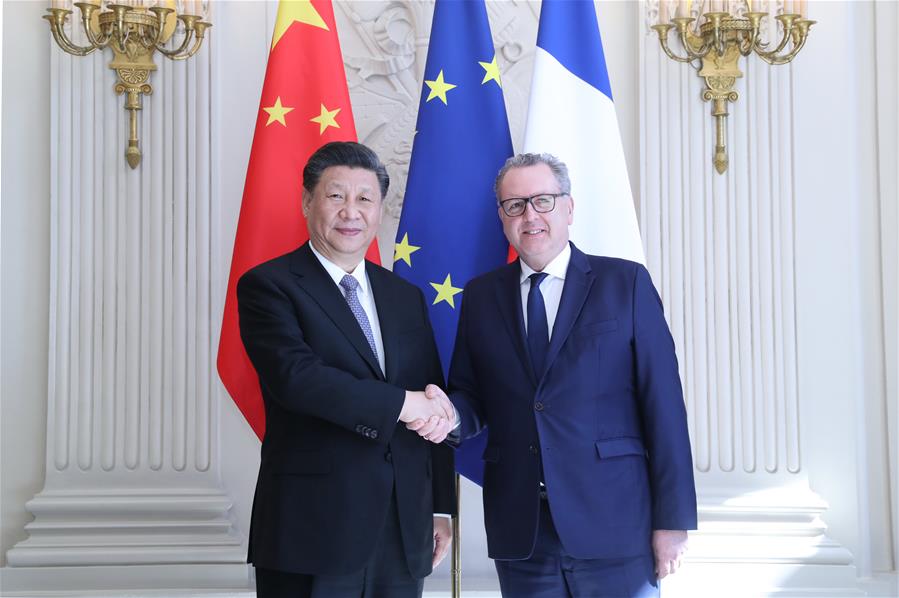 Xi said he was delighted to visit the time-honored French National Assembly, noting that the old generations of Chinese leaders studied in France and developed a bond with the European country.

Fifty-five years ago, Xi said, General Charles de Gaulle, in a remarkable spirit of independence, made the strategic decision to establish diplomatic relations with China.

Such spirit has now become ever more indispensable when the world is undergoing profound changes unseen in a century, he said.

China-France relations, which have become closer, more stable and more productive, are marching forward on a right path, Xi said.

China and France, as two great nations, should intensify people-to-people exchanges and dialogue of minds, while promoting mutually beneficial cooperation in a broad range of areas, Xi said.

The president said China is ready to deepen cooperation with France in traditional areas and expand cooperation in emerging ones.

China is committed to promoting world multipolarization and resolute in safeguarding multilateralism, Xi said, adding that his country is ready to intensify communication and coordination with France on international affairs.

It is very important that China and the European Union (EU) strengthen cooperation in the face of prominent instabilities and uncertainties in the international situation, Xi said.

Ferrand said his country takes pride in the precious bond between France and the first generation of Chinese leaders.

The French National Assembly is ready to deepen friendship between France and China, and carry forward the tradition of friendly communication and cooperation in various areas, he said.

The French side is willing to join hands with the Chinese side to safeguard multilateralism and strengthen cooperation between the EU and China, he added.