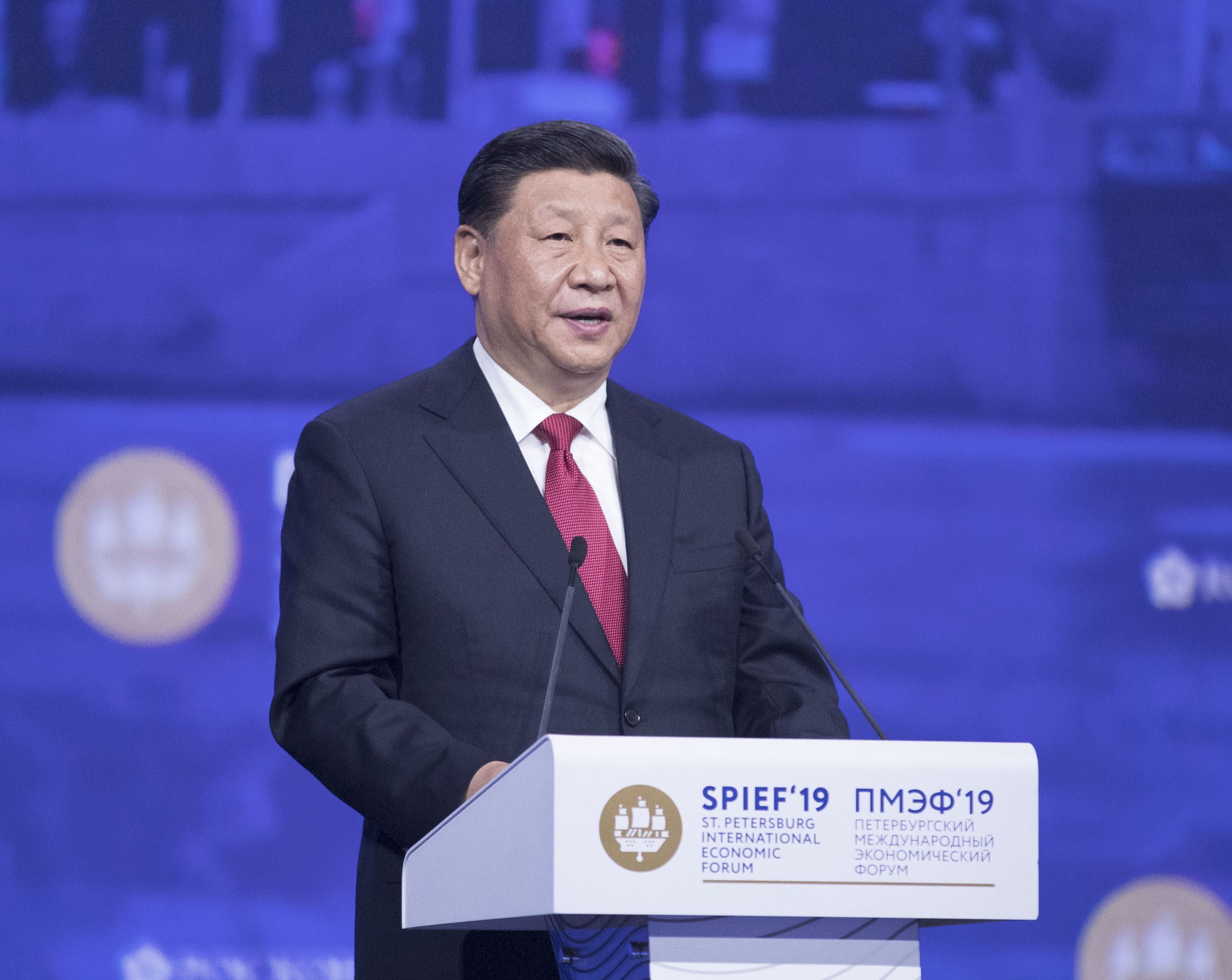 ST. PETERSBURG, Russia, June 8 (Xinhua) -- Chinese President Xi Jinping here on Friday called for joint efforts in forging ahead with sustainable development and the building of a community with a shared future for mankind.

Facing the world's profound changes unseen in a century, said Xi, China stands ready to make joint efforts with the international community to create an open and pluralistic world economy, a happy society that is inclusive and benefits all, and a beautiful homeland with harmonious coexistence between humanity and nature, and explore a new path of sustainable development.

Noting that this year marks the 70th anniversary of the founding of the People's Republic of China, Xi said China, as the world's largest developing country and a responsible major country, has been unswervingly fulfilling its commitment to sustainable development and attached great importance to enhancing global cooperation on sustainable development.

The Chinese president recalled that he put forward the Belt and Road Initiative in 2013 to realize win-win cooperation and common development among countries, adding that the initiative, highly compatible with the UN 2030 Agenda for Sustainable Development in terms of goals, principles and implementation approaches, has received positive response and support from the international community.

At the second Belt and Road Forum for International Cooperation, which was successfully held in April in Beijing, all participating sides agreed to forge ahead with high-quality joint construction of the Belt and Road along a green, low-carbon and sustainable development path.

Calling Russia China's priority cooperation partner in all areas, Xi said jointly building the Belt and Road shares a similar philosophy with the Greater Eurasian Partnership proposed by Putin, adding that the two initiatives can support each other, facilitate each other and advance together to forcefully promote regional economic integration and realize common sustainable development.

Firstly, we should stick to the principle of extensive consultation, joint contribution and shared benefits, and work together to create an open and pluralistic world economy, said Xi.

China will push ahead the process of economic globalization, uphold the multilateral trade system, endeavor to solve the imbalance and inequality in global economic development, and create more opportunities for developing countries, he said.

China, he added, is willing to share with the rest of the world its latest research and development results including the 5G technology so as to jointly cultivate new core competitiveness.

Secondly, we should stick to the practice of putting people first, and strive to build a happy society that is inclusive and benefits all, said the Chinese president.

China, he added, is willing to boost communication and cooperation with other countries in such areas as poverty reduction and social security, in order to bring a greater sense of achievement, happiness and security to all peoples.

Thirdly, we should stick to the pursuit of green development, and try to build a beautiful homeland with harmonious coexistence between humanity and nature, Xi said.

China will uphold the concept that clear waters and green mountains are as valuable as mountains of gold and silver, strive to win the battles against air, water and soil pollution, encourage the development of green industries and renewable energy, and promote economical use and recycling of resources, Xi said.

China, he added, will join hands with other parties to address urgent issues like climate change and biodiversity protection, and implement global consensuses such as the Paris Agreement.

Unprecedented inadaptation and asymmetry are emerging between the global governance system and the changes of the international situation, as emerging-market economies and developing countries are rising at an unprecedentedly high speed, and the new round of technological and industrial revolution is leading to unprecedentedly fierce competition, said the Chinese president.

As the world is standing at a crossroads of history again, pooling wisdom and efforts of everyone to cooperate and achieve win-win outcomes is the right choice to address changes in the world, Xi said, highlighting sustainable development as the "golden key" to solving global problems.

Xi said China stands ready to make concerted efforts with all other parties to uphold the concept of sustainable development, shoulder the responsibility of building a community with a shared future for mankind, advocate multilateralism, and improve global governance, so as to promote long-lasting peace in the global village and create a more prosperous and beautiful world.

Xi arrived in St. Petersburg on Thursday to attend the SPIEF for the first time. The Chinese president held talks with Putin in Moscow on Wednesday.