BEIJING, Oct. 1 (Xinhua) -- Chinese President Xi Jinping on Thursday highlighted the extraordinary achievements women have made in the society and the challenges they face globally, calling for joint efforts to promote gender equality and women's development around the world. 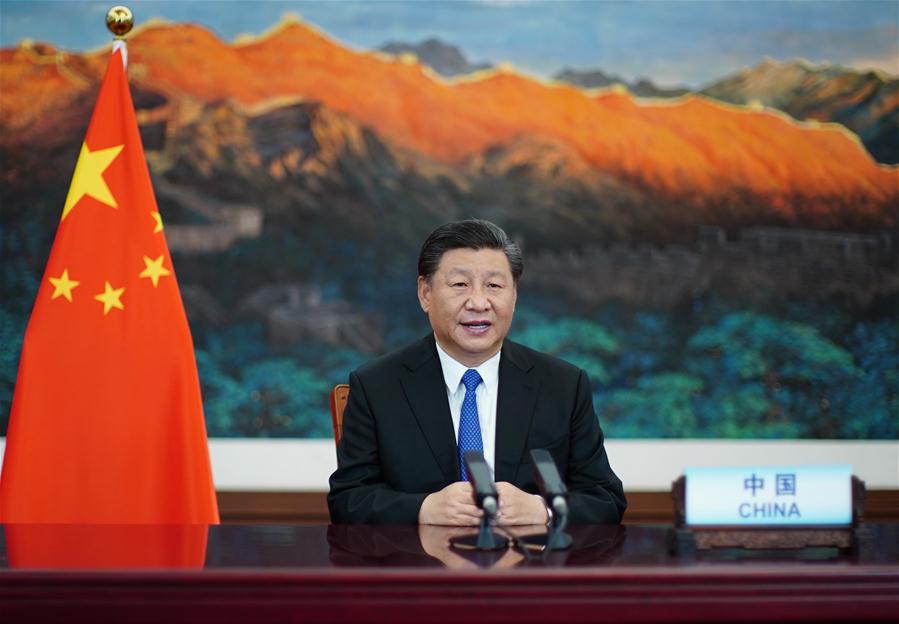 Chinese President Xi Jinping delivers an important statement at a high-level meeting held by the United Nations (UN) to mark the 25th anniversary of the Fourth World Conference on Women via video on Oct. 1, 2020. (Photo: Xinhua)

Xi made the call in Beijing via video when addressing a high-level meeting held by the United Nations (UN) to mark the 25th anniversary of the Fourth World Conference on Women.

Women are creators of human civilization and drivers of social progress, and they have made extraordinary achievements across all fields of endeavor, Xi noted.

In the ongoing fight against COVID-19, female medical and epidemic control workers, researchers, community workers and volunteers over the world, braving danger and working around the clock, have fought at the front line of the battle, Xi said.

"With their dedication and ingenuity, they have written heroic epics of saving people and protecting lives," Xi said. "They truly deserve our admiration."

In China, at the height of the battle against COVID-19, many women medical workers, in their tens of thousands, have taken on the virus bravely by putting themselves in harm's way, Xi noted.

More than 40,000 health workers from across the country rushed to Hubei Province, which was the hardest hit by the virus in China, and two-thirds of them were women.

"Their courage and hard work have shown the very best of the medical profession," Xi stressed. "Their devotion and sacrifice have kept the nation intact through difficult times."

Over the past 25 years, the powerful message of the Fourth World Conference on Women held in Beijing has unleashed many positive changes, Xi said.

The social status of women is significantly higher, and increasingly, women are playing an important role of "supporting half of the sky," Xi said, adding that gender equality and women's empowerment are now important goals of the 2030 Agenda for Sustainable Development.

He stressed that the spread of COVID-19 worldwide has brought greater challenges to women.

"In both containing COVID-19 and promoting post-COVID economic and social recovery, it is particularly important that we address the special needs of women," Xi said, urging efforts to deliver on the Beijing Declaration and Platform for Action.

To this end, Xi put forward four major steps for the world to take.

"First, we need to minimize the impact of COVID-19 on women," Xi said, calling for special attention to the health, social and psychological needs and working environment of frontline women medical workers.

"We need to improve social services, with priority given to special groups such as pregnant and postnatal women, and children," he noted.

Xi said special care may be given to women in difficulty such as those in poverty, old age or with disabilities, and efforts must be made to enhance benefits for women, address their concerns, and deliver results for their well-being.

"Second, we need to strive for genuine gender equality," Xi said. "Protection of women's rights and interests must become the commitment at the national level."

As the world pursues post-COVID recovery, new opportunities may be created for women to participate in decision-making and be more involved in national, economic, cultural and social governance, he said.

He stressed the need to eliminate prejudice, discrimination and violence against women and make gender equality a social norm and moral imperative observed by all.

An enabling environment must be created, in which women are motivated, their creativity is unleashed to the full, and they truly feel satisfied, happy and secure, Xi said, underscoring the role of the government to be fully leveraged to mobilize all stakeholders to support women and help them live their lives to the full.

He said more should be done to eliminate violence, discrimination, poverty and other old problems and to address new challenges such as bridging the gender digital divide, so as to make women-related targets early harvest results of the UN's 2030 Agenda.

Xi stressed that equality between men and women is a basic state policy in China, noting the country has put in place a legal system comprising over 100 laws and regulations for fully protecting women's rights and interests.

In China, the gender gap in compulsory education has been largely closed, with women accounting for over 40 percent of the country's workforce.

Five years ago, Xi proposed a global leaders' meeting on gender equality and women's empowerment. Now the host of proposals he put forward at the meeting for advancing global cooperation in the endeavor have all been implemented.

Pledging China is prepared to do even more to support the global cause of women's development, he proposed the convening in 2025 of another global leaders' meeting on gender equality and women's empowerment.

"We still have a long way to go and need to work real hard to build a world in which women are free from discrimination as well as a society of inclusive development," Xi said.

"Let us work together and redouble efforts to promote gender equality and advance the global cause of women's development," he said.