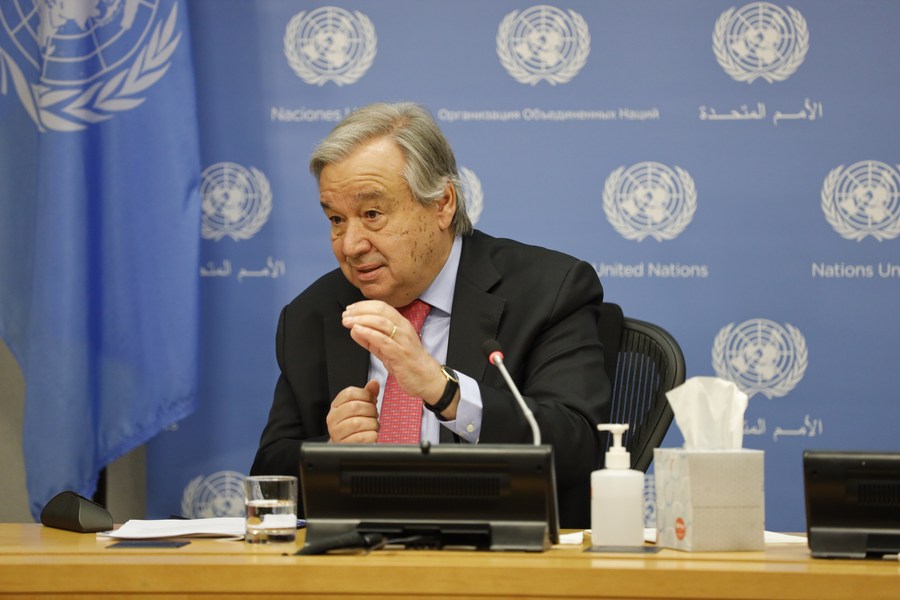 Noting that the United Nations (UN) has gone through rare and complicated situations in recent years, Xi said multilateralism has received more and more support as a result.

Pursuing multilateralism is inseparable from the United Nations, international law and cooperation among countries, Xi said.

The world needs genuine multilateralism, Xi said, adding that all countries should act in accordance with the purposes and principles of the UN Charter, refrain from pursuing unilateralism and hegemonism, and should not use multilateralism as a pretext to form small circles or stir up ideological confrontation.

China will continue to support the work of the United Nations and that of Secretary-General Guterres, and uphold genuine multilateralism, Xi said.

Xi stressed that the most important task for the international community remains fighting the COVID-19 pandemic, saying that the world should strengthen cooperation and reject political manipulation.

Noting that major countries should set an example by providing more public goods, Xi said that China has provided vaccine assistance for more than 80 developing countries and exported vaccines to more than 50 countries.

China has decided to offer vaccines to the UN peacekeeping operations and the International Olympic Committee, and will continue to actively support COVAX and make continuous efforts to eliminate the "vaccine divide," Xi added.

Noting that the global campaign to tackle climate change is of great importance, Xi said China has announced that it will strive to peak carbon dioxide emissions before 2030 and achieve carbon neutrality before 2060, which is a much shorter time span than many developed countries would spend.

China has taken the initiative to do that, instead of doing it passively, Xi said, adding that action speaks louder than words.

China will make its utmost efforts and contribution to addressing climate change in light of actual possibilities, and will continue to actively promote international cooperation in accordance with the principle of common but differentiated responsibilities, Xi said.

He stressed that China has done its best to promote South-South cooperation and provide assistance for developing countries, adding that this is China's consistent practice as well as its moral responsibility.

Many of the initiatives put forward by China, especially the joint Belt and Road construction, are based on such considerations, Xi said, adding that the Chinese always keep their words and do what they say.

Noting that this year marks the 100th anniversary of the Communist Party of China, Xi said China has scored a complete victory in poverty alleviation, achieved significant strategic results in building a moderately prosperous society in all respects, and embarked on a new journey of fully building a modern socialist country.

As this year also marks the 50th anniversary of the restoration of the People's Republic of China's (PRC's) lawful seat in the United Nations, China will hold grand commemorative activities, Xi said.

China is ready to strengthen cooperation with the United Nations, and continue to push forward the implementation of the UN 2030 Sustainable Development Goals, Xi added.

For his part, Guterres congratulated the CPC on its centenary, and the PRC on the 50th anniversary of the restoration of its lawful seat in the United Nations.

The United Nations, he said, highly appreciates China's great achievements in the country's poverty alleviation, as well as its firm support for multilateralism and the work of the United Nations, speaks highly of the targets for the intended nationally determined contributions and major measures announced by China to tackle global climate change, and thanks China for its important contributions to the international cooperation in fighting the COVID-19 pandemic, especially to achieving fair distribution of COVID-19 vaccines in developing countries and promoting the recovery and growth of the world economy.

Guterres said he fully agrees that all countries should practice genuine multilateralism on the basis of the UN Charter and international law, adding that China is vital to the international multilateral system.

The United Nations, Guterres said, looks forward to closer cooperation with China in such fields as world peace and security, biodiversity protection, climate change response, and assistance for developing countries to achieve sustainable development, so as to take the UN-China relationship to a new height.