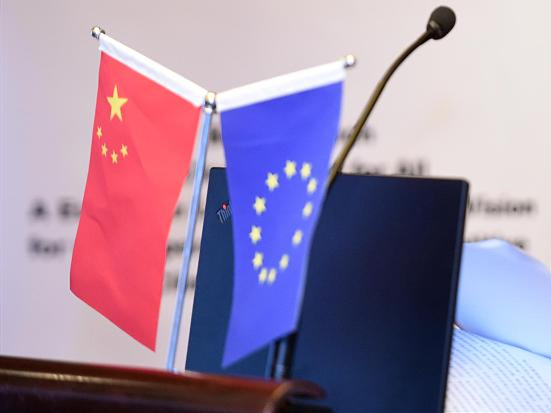 BEIJING, Dec. 9 (Xinhua) -- Chinese President Xi Jinping and President of the European Council Charles Michel held phone talks on Monday, agreeing that strengthening China-European Union (EU) relations and cooperation is in the common interests of both sides and the world.

Xi congratulated Michel on his election and assuming the presidency of the European Council.

Both China and the EU advocate multilateralism and free trade, firmly defend a multilateral trading system with the World Trade Organization (WTO) at its core, and advocate that all countries should act according to the rules, Xi noted.

Under the current circumstances, China and the EU need to strengthen communication, coordination and cooperation to ensure a stable development of the China-EU comprehensive strategic partnership, which not only serves the common interests of both sides, but brings more stability, certainty and positive energy to the world, Xi said.

Noting that China views its relations with the EU from a strategic height and with a long-term perspective, Xi said China and the EU are mutually beneficial partners of cooperation, rather than rivals in a zero-sum game.

China's development is an opportunity, not a challenge for the EU, and the China-EU relations boast broad prospects for development, Xi said.

China's EU policy will maintain its continuity and stability, and China will as always support EU's development and its active and important role in the world, Xi said, expressing belief that new EU institutions will maintain continuous and forward-looking policies towards China, continue to actively and constructively develop relations with China, and work with China to promote the positive and sound development of China-EU partnerships for peace, growth, reform and civilization, so as to make China-EU cooperation fruitful.

Xi stressed that China is willing to work with the EU to ensure the success of a series of important bilateral exchanges and agenda in 2020.

He also pledged China's commitment to an alignment between the Belt and Road Initiative and the EU strategies on Eurasian connectivity, an early reaching of a bilateral investment agreement, a comprehensive and effective implementation of the Paris Agreement on climate change, as well as efforts to push the WTO reform towards a correct direction that benefits all parties.