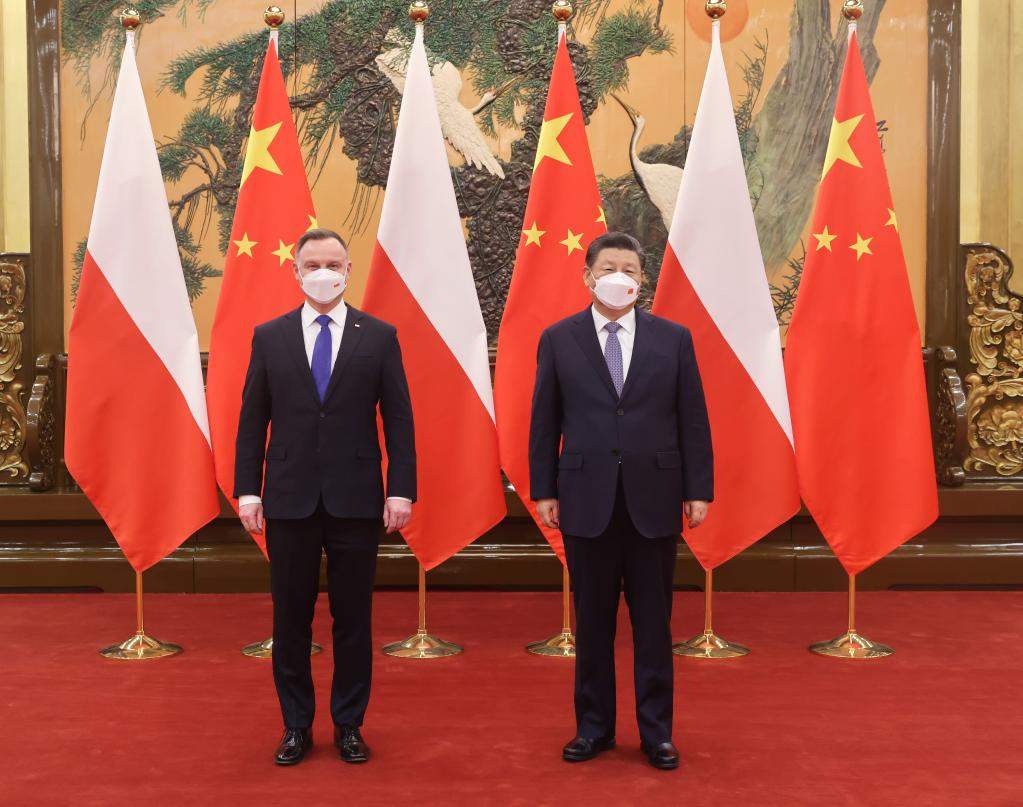 Chinese President Xi Jinping meets with Polish President Andrzej Duda, who came to China for the opening ceremony of the Beijing 2022 Olympic Winter Games, at the Great Hall of the People in Beijing, capital of China, Feb. 6, 2022. (File photo: Xinhua)

Xi recalled that when Duda came to China for the opening ceremony of the Beijing Winter Olympics earlier this year, they had friendly exchanges and reached many important consensuses on advancing bilateral relations.

Since then, various departments of the two countries have actively worked with each other for implementation, and made positive progress in the export of Polish agricultural products to China, China-Europe freight trains and personnel exchanges, the Chinese president said.

The Chinese side cherishes its traditional friendship with Poland and regards the country as a preferred partner for cooperation in Europe, Xi noted, adding that China stands ready to maintain close communication with the Polish side, enhance political mutual trust and continue to elevate the China-Poland comprehensive strategic partnership.

Xi stressed that the two sides should strengthen policy communication, make use of such mechanisms as the China-Poland Intergovernmental Cooperation Committee and the joint economic and trade commission to enhance strategic synergy between the two sides, advance high-quality joint Belt and Road construction, deepen practical cooperation in such areas as economy, trade and connectivity, and work together to foster new growth points in green development, digital economy and other fields.

The Chinese president said that the two sides should work hard for the early launch of the China-Central and Eastern European countries (CEEC) wholesale market for agricultural products, and actively cooperate in planning and organizing relevant events to mark the 10th anniversary of China-CEEC cooperation mechanism, so as to lay a solid foundation for cooperation in the next decade.

Xi also said he hopes Poland can actively support the development of the China-Europe relationship and safeguard the overall interests of that relationship.