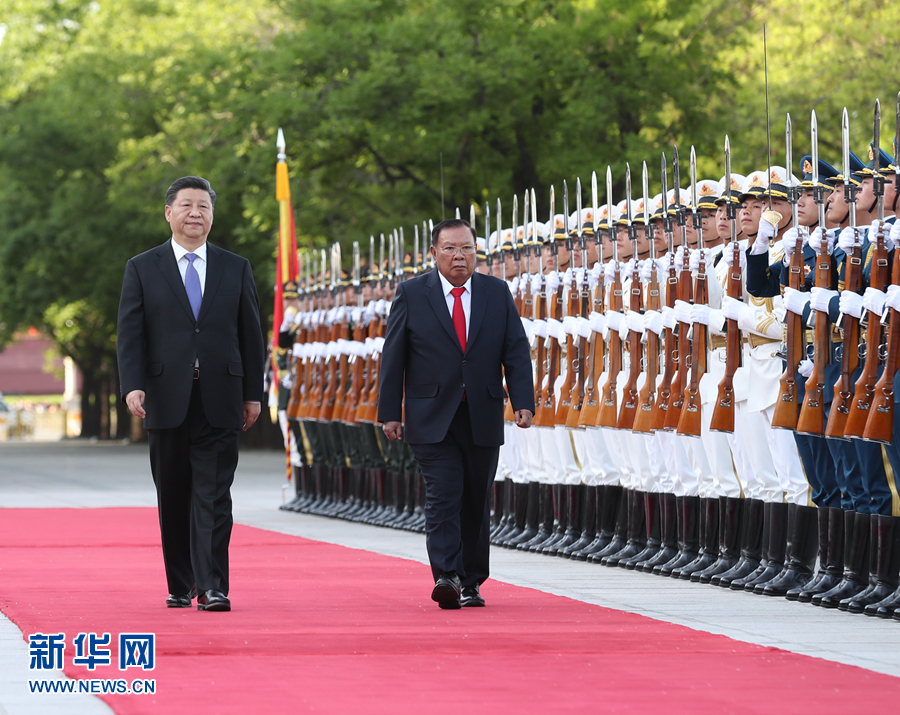 The two leaders agreed to forge ahead with the efforts in building a community with a shared future for the two countries and work together to usher in a new era for bilateral ties.

After the talks, the two leaders inked an action plan between the CPC and the Lao People's Revolutionary Party on building a community with a shared future for the two countries.

Noting that this year marks the 10th anniversary of the establishment of the comprehensive strategic cooperative partnership between China and Laos, Xi said as bilateral ties now stand at the best stage in history, China will work with Laos to take the opportunity of signing the action plan to jointly cultivate the bilateral relationship in the new era.

Xi said China and Laos should take strengthening the leadership of the CPC and the Lao People's Revolutionary Party as guidance and grasp the correct direction of the development of bilateral ties in the new era.

He said the two parties must strengthen their strategic self-confidence and sense of urgency, uphold party leadership and ensure the long-term stability of the two countries, so as to contribute to the development of the socialist cause.

Noting the two sides should maintain close high-level exchanges, Xi said he would like to carry on the good tradition of conducting annual meetings with Bounnhang.

Xi also called on the two sides to deepen theoretical exchanges and strengthen exchanges between their cadres.

China and Laos should accelerate the synergy of each other's development strategies, promote the construction of economic corridors, expand the radiation and demonstration effects of major projects such as the China-Laos railway, so as to contribute more to regional connectivity, common development and prosperity, Xi said.

The two sides should also closely coordinate and cooperate within multilateral mechanisms such as the United Nations, East Asian cooperation and the Lancang-Mekong cooperation, said the Chinese president.

He said it is an unshakable policy of Laos to develop its traditional friendship with China. Laos appreciates China's long-term support and will work with China to give further play to the leading role of the inter-party ties in the development of the state-to-state relationship, and maintain regular high-level meetings between the two parties.

Regarding the Belt and Road initiative, Bounnhang said Laos will continue to accelerate cooperation in major projects, so as to further promote the prosperity of the two countries and the region.

Concerning the action plan, Xi said this is the first time for China and Laos to sign a cooperation document on building a community with a shared future on the bilateral level, which will not only benefit the two parties, countries and peoples, but also serve as a significant exploration in advancing humanity.

Bounnhang said the signing of the action plan will further promote the building of a community with a shared future for humanity.

The two leaders also watched the signing of a series of cooperation documents after the talks.