WUHAN, June 30 (Xinhua) -- During his inspection tour in Wuhan, Hubei Province, on Tuesday, President Xi Jinping, also general secretary of the Communist Party of China (CPC) Central Committee and chairman of the Central Military Commission, stressed that self-reliance in science and technology is the foundation of national prosperity and the key to national security. Xi underlined the importance of fully and faithfully applying the new development philosophy, further implementing the innovation-driven development strategy, and keeping the lifeblood of science and technology in our own hands. China must make greater progress in self-reliance in science and technology, work to make China's development more independent, autonomous, and secure, and nurture more new technologies and industries, so that we can open up new fields and new tracks for economic development and cultivate new strengths to give us an edge in international competition. 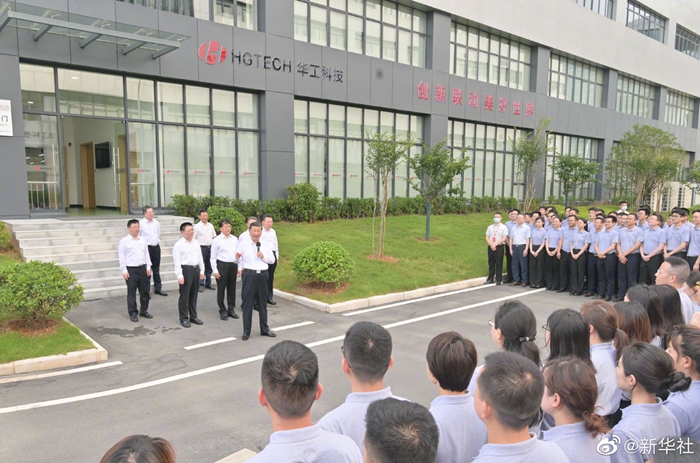 On Tuesday afternoon, Xi went to inspect enterprises and communities in Wuhan. He was accompanied by Wang Menghui, secretary of the CPC Hubei Provincial Committee, and Wang Zhonglin, governor of the province.

With our country's further development, it is urgent to address the "bottlenecks" in core technologies in key fields. We must stay problem-oriented and give full play to the strength of new mechanisms to mobilize national support. Through vigorous endeavor, we can catch up with others and realize self-reliance in science and technology at a faster pace, Xi noted.

At a showroom of the company displaying laser science and technology and a workshop manufacturing smart laser equipment for semi-conductor panels, Xi took a look at the exhibits featuring the industrial application of laser technologies. He stressed that high-end manufacturing provides high-quality economic growth with important support. To promote the transformation and upgrading of China's manufacturing sector and build China into a strong manufacturing power, we must advance research and development in various technologies, increase the replacement rates of domestic technologies, and grasp the lifeblood of science and technology firmly in our own hands, so as to ensure that our country becomes truly strong, Xi said.

Xi talked with the employees of the company in front of the workshop building. He noted that although China is the world's second largest economy, weak links still exist in many areas. The foundation of some industries is not solid enough, and innovation is indispensable for their further development. Innovation plays a decisive role in achieving the second centenary goal of building a modern socialist country in all respects. The CPC Central Committee attaches great importance to scientific and technological innovation and has been implementing the strategy for invigorating China through science and education and the innovation-driven development strategy. If every city, every high-tech industrial development zone, every sci-tech business, and every sci-tech researcher are able to take solid steps to promote scientific and technological innovation with the focus on the direction of development determined by the country, our goal will definitely be achieved, Xi said.

Xi added that the current generation must undertake such a glorious mission. He said scientific and technological innovation requires both spending and talents and that he feels pleased to see that many young and vigorous talents are brought together in this company. The CPC Central Committee cares much about the career development of sci-tech talents. Party committees and governments at all levels are required to try their best to create mechanisms, systems, and working and living environments favorable to scientific and technological innovation, so that scientists and technologists can make further contributions to the country and the people. Xi also expressed the hope that all the talents will continue to work hard to make greater achievements.

Xi later inspected a residential community named Zhiyuan located in Zuoling Street of the East Lake High-tech Development Zone. The community is rebuilt from a shanty town where most residents are from a state-owned enterprise. After the outbreak of COVID-19, a five-level system with epidemic control measures designated to specific personnel was strictly implemented to ensure work resumption and epidemic control were well coordinated so that community stability was secured. As a result, residents' life and work returned to normalcy in an orderly manner.

After being briefed on Hubei Province's routine epidemic prevention and control as well as its post-epidemic community governance work, Xi emphasized that since the victory of defending Wuhan in 2020, the city has encountered multiple clusters of infection and transmission in the past two years, but they were quickly brought under control without a big rebound. The routine epidemic prevention and control work in Wuhan is good, and the experience is worth summarizing. What has been achieved has proved that the CPC Central Committee's principles and policies on epidemic control are correct and effective and we must unswervingly uphold them, Xi said.

Xi walked into the room of volunteer services and learned about the operation of the joint prevention and control mechanism against the epidemic at the primary level from community workers, Party officials designated from government departments to communities, and volunteers. He encouraged them to build tight the frontline fence of prevention and control against COVID-19 to create a reassuring and peaceful living environment for residents.

Xi expressed approval of Zhiyuan community's routine epidemic prevention and control measures such as the nucleic acid sampling for the convenience of the community residents as he walked around. He emphasized that in the fight against the epidemic, residential communities have played a significant role in both emergency and routine prevention and control. Generally speaking, effective epidemic control depends on early detection, quick response, and the joint efforts of the broad masses of the people, and communities serve as an important basis of this work. We must refine communities' routine prevention and control measures, be decisive and do not hesitate upon discovering cases, take rational and strict control measures, do an even better job in science-based epidemic control and targeted measures, and firmly hold the defense line in communities, Xi said.

To address the prominent problem of population aging, Zhiyuan community has created a new elderly care service mode that focuses on in-home care, relies on services from the community, incorporates elderly care institutions, and integrates medical and health care. At the public service center of the community, Xi learned from community workers there about how Party building activities consolidate community governance and services for facilitating people's lives. He talked with elderly people turning to the center for help and asked about conditions of their families. Xi pointed out that communities are the basic units of urban governance systems. One of China's strengths in its national governance system lies in the solid work of urban and rural communities. Work must be done to strengthen the building of CPC organizations in communities, promote their political and organizational role, and give full play to their leading role and the pioneering role of Party members in community governance. Xi urged that more resources should be channeled to communities to strengthen the ranks of community workers, step up the application of information technologies, improve emergency response capabilities and management services, and consolidate foundation for urban governance.

Government officials and other people gathered at the square of the community to say hello to Xi. Xi said cordially that he had been concerned with people in Wuhan and now he is here to visit them again in this great city after two years. After the epidemic outbreak, community workers have been working strenuously at the frontline and shouldered much trivial work. They have provided services for residents with all-out efforts and have achieved a lot with painstaking work, for which he would like to send sincere greetings to community workers across China.

Xi stressed that the COVID-19 epidemic has posed a serious test for the country. We have always put the people and their lives first, worked hard to prevent both inbound cases and domestic resurgences, upheld a dynamic zero-COVID policy, and kept adjusting epidemic prevention and control measures in light of new developments. Through such efforts, we have protected the safety of people's lives and their health to the maximum extent. Given its huge population, if China adopted such prevention and control policies as herd immunity or a hands-off approach, the consequences would be unimaginable. The CPC Central Committee made the decision to adopt a dynamic zero-COVID policy based on the nature and purpose of the Party and the country's actual conditions. We would rather suffer temporary losses in economic development than harm people's lives and health, particularly the elderly and children. Judged from the effects in all aspects, our COVID-19 response measures are the most economical and effective. With the leadership of the CPC and a strong community-level network as the foundation, we have the ability and strength to implement the dynamic zero-COVID policy until the final victory is achieved.

Xi noted that the epidemic has not reached bottom and we still face great pressure of preventing inbound cases and domestic resurgences. Victory comes from perseverance. We need to overcome the tendencies of letting down our guard, of being weary of fight, and of relaxation, and carry out prevention and control measures attentively while trying our best to maintain stable and healthy economic development. Party committees and governments at all levels must work to help people address their difficulties and ensure that economic development and people's production and life are as less affected as possible. We have confidence in our ability to coordinate epidemic prevention and control with economic and social development, and to bring the country's economic growth this year to a relatively good level.

Ding Xuexiang and other leading officials of relevant departments of the central authorities accompanied Xi on the inspection tour.