CHINA Xi Jinping: a leader who cares deeply for veterans

Xi Jinping: a leader who cares deeply for veterans

Chinese President Xi Jinping on Friday emphasized efforts to break new ground in the work of veterans affairs while meeting with delegates attending a national work conference on veterans.

Xi encouraged officials devoted to veterans welfare to stay true to their original aspirations and keep their mission firmly in mind in securing new progress in work of veterans affairs.

Meeting with one of the delegates Zhang Fuqing, a 94-year-old war hero, Xi shook Zhang's hand and extended his warmest regards. Xi said to him, “You are a role model for the whole Party and the whole country. Take care, and I wish you good health and a long life." 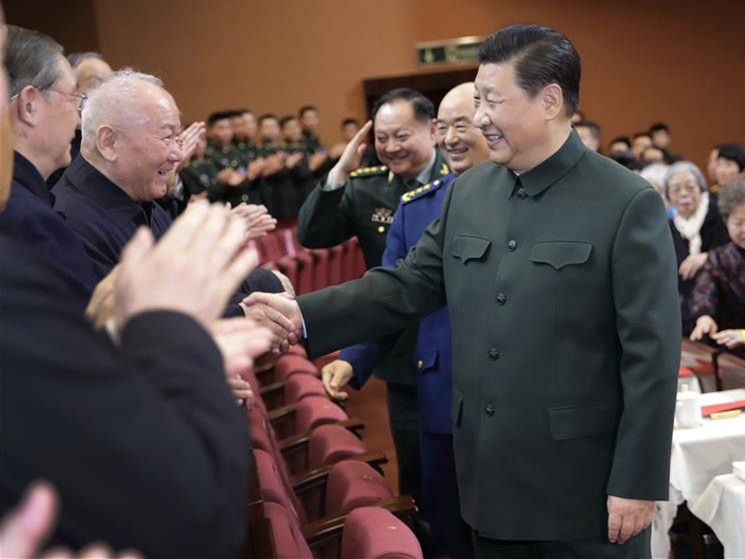 Chinese President Xi Jinping, also general secretary of the Communist Party of China Central Committee and chairman of the Central Military Commission, shakes hands with the retirees during a gala for retired military officials with Beijing-based troops in Beijing, capital of China, on Jan. 22, 2019. (Photo: Xinhua)

Xi has many times given important instructions on the work of veterans affairs, providing fundamental guidance.

On March 12 this year, at a plenary meeting of the delegation of the People’s Liberation Army and the People’s Armed Police Force to the second session of the 13th National People’s Congress in Beijing, Xi said that governments at all levels should in turn support the military’s work, make appropriate arrangements for veterans’ employment, take good care of military retirees with physical difficulties and the family members of military personnel, and support the military’s efforts to withdraw from all its commercial activities.

When he visited a service and administration station for veterans in a community in Tianjin on January 17, Xi stressed that setting up institutions for veteran affairs enhances the management of veterans and better protects their welfare in order to make military service a publicly respected occupation.

Military veterans have received tangible welfare benefits from a host of measures since the 18th National Congress of the Communist Party of China. Four million military veterans have been properly resettled. The standards of the pension and subsidies for them have improved year after year. Some retired soldiers have had their social insurance re-secured. The employment and entrepreneurship environment for military veterans has been continuously optimized.