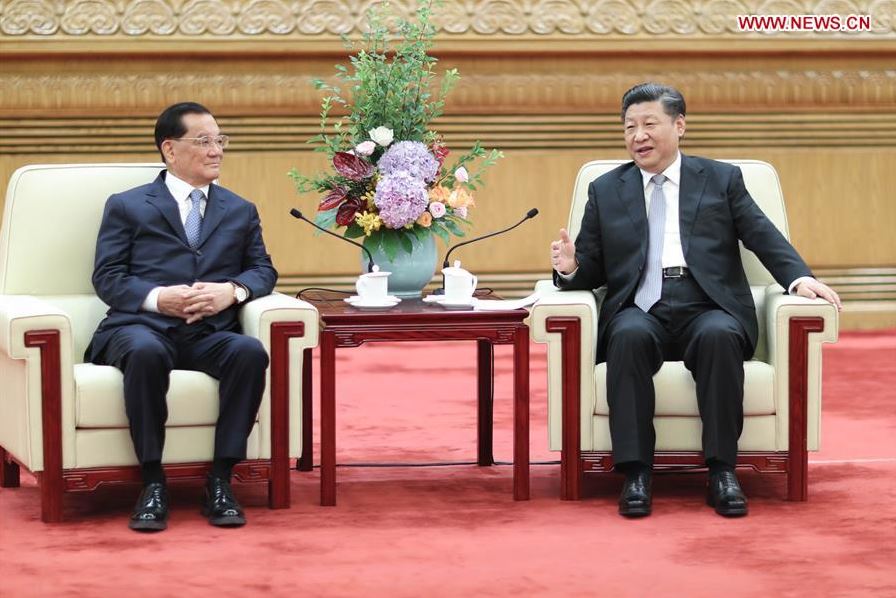 Xi Jinping (R), general secretary of the Communist Party of China (CPC) Central Committee, meets a delegation of people from various sectors in Taiwan, led by former chairman of the Kuomintang (KMT) party Lien Chan (L), at the Great Hall of the People in Beijing, capital of China, July 13, 2018. (Photo: Xinhua/Ju Peng)

Chinese President Xi Jinping, general secretary of the Communist Party of China (CPC) Central Committee, on Friday met with a delegation of people from various sectors in Taiwan, led by former chairman of the Kuomintang (KMT) party Lien Chan.

The pursuit of a just cause and people's common aspirations is unstoppable, said Xi during the meeting at the Great Hall of the People in Beijing.

"We have the confidence and ability to keep a firm hold on the correct direction, work for the peaceful development of cross-Strait relations, and advance the process toward the peaceful reunification of China," Xi said.

Xi called on compatriots on the two sides of the Taiwan Strait to work together to uphold the 1992 Consensus, which embodies the one-China principle, and to resolutely oppose and deter "Taiwan independence."

He also called for joint efforts by both sides to expand and deepen cross-Strait exchange and cooperation in various fields, improve the kinship among compatriots and their wellbeing, and "jointly write the new chapter of the great rejuvenation of the Chinese nation."

"Once seeing through a long-term perspective and with a broad vision, compatriots from the two sides of the Strait would grasp the big picture of cross-Strait relations and overcome difficulties to push it forward," Xi said.

"We have full confidence in the future of cross-Strait relations," he said.

The confidence was based on the reason that the peaceful development of cross-Strait relations and joint efforts to realize national rejuvenation is the right path "in line with interests of the whole nation and the tide of the times, which will benefit compatriots from the two sides and gain their support," he said.

It was also because, despite ups and downs in cross-Strait relations, people from the two sides have never been separated emotionally, and in their nationality and cultural identity, and the general trend of ties is moving forward, Xi said.

The two sides of the Strait belong to "an inseparable community of shared future that stands together through thick and thin," he said.

"No one can stop the common aspiration of compatriots on the two sides for a better life and closer and more favorable cross-Strait relations," he said.

Noting that the right path should be upheld, Xi urged people of the two sides to have stronger faith and show solidarity, particularly under the current situation.

The 1992 Consensus should be upheld and "Taiwan independence" should be opposed, he said.

"We will never allow any attempts of 'Taiwan independence' to succeed. Such attempts are doomed to fail," Xi said, urging people from the two sides to firmly oppose and deter activities of "Taiwan independence" with concrete action.

"Compatriots across the Strait should show empathy, stand in each other's shoes and understand each other better so as to forge closer bonds," he said.

The welfare of people across the Strait should be promoted, he said.

Now, when national rejuvenation is heading toward a brighter future, the nation has a stronger ability and better conditions to improve compatriots' welfare, Xi said.

Promising to provide equal treatment for Taiwanese people and businesses in the mainland, he said more policies will be issued, following the 31 measures adopted in February to promote cross-Strait economic and cultural cooperation and exchange.

Compatriots across the Strait should be united to work for national rejuvenation, Xi said, stressing that Taiwanese people should not and will not be absent from the cause.

People across the Strait should follow the tide of history, work together for the greater national interests, jointly promote peaceful development of cross-Strait relations, advance the process of peaceful reunification of the motherland, and realize the Chinese dream of national rejuvenation, Xi said.

The current situation in the Taiwan Strait has been destabilized and is causing harm to the security and wellbeing of Taiwan residents, Lien noted.

"People from the two sides both belong to the Chinese nation who went through both good and hard times together," Lien said, calling on them to abandon internal rifts and work together to pursue peaceful cross-Strait relations and shared prosperity across the Strait.

The two sides should consolidate political mutual trust and restart dialogue on the basis of the 1992 Consensus, and address, step by step, political differences left over by history, he said.

Lien called on the two sides to promote economic cooperation, cultural and people-to-people exchanges, expand mutual benefits, enhance the kinship between people across the Strait, and continuously increase integration to realize rejuvenation of the Chinese nation.