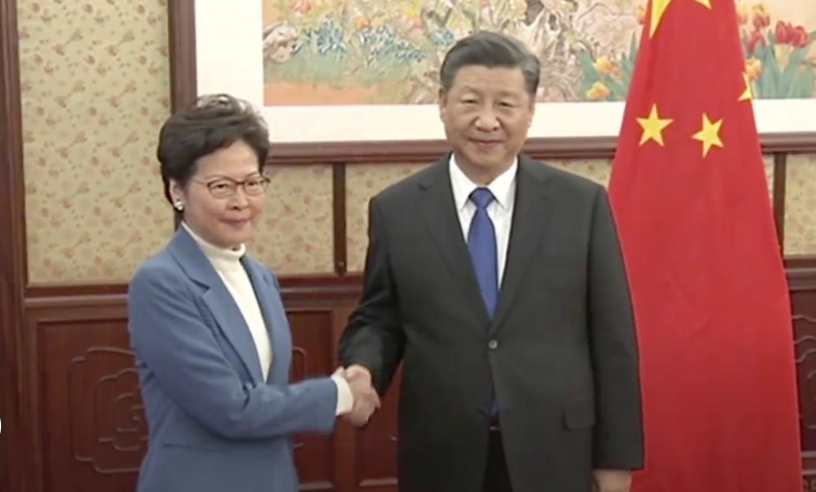 Unrest in the financial hub has entered its sixth month, and President Xi spoke highly of Lam's courage and efforts during the city's "hard times."

The chaos, which began with protests against a now-withdrawn fugitive bill that would have allowed the transfer of suspects to jurisdictions with which Hong Kong currently lacks an extradition deal, including the Chinese mainland, Taiwan and Macao, has involved frequent acts of violence.

The situation in Hong Kong SAR this year has been the most complicated since the city's return to China in 1997, Xi said, before praising the SAR government's efforts with the "One Country, Two Systems" principle as baseline.

"You have led the SAR government to actively respond to social concerns, adopt a series of policies and measures to support businesses and mitigate difficulties for the people, and carefully study solutions to deep social tensions and problems," Xi told Lam.

He also delivered firm support to the Hong Kong police in strictly enforcing the law, and expressed hope that Hong Kong residents from all walks of life unite together and put the city's development back on track.

Lam concludes her four-day duty visit to the Chinese capital on Tuesday. Earlier on Monday she met with Premier Li Keqiang, during which she expressed appreciation for the central government's support for the HKSAR.

She has pledged measures to boost Hong Kong's economy and improve people's livelihoods, while integrating with the overall development plan of China and expanding cooperation with the world so as to consolidate the city's status as an international finance, trade and shipping center.